Young German Mona Barthel won her first WTA title at the Moorilla Hobart International on Saturday - but it's only added to her stress. 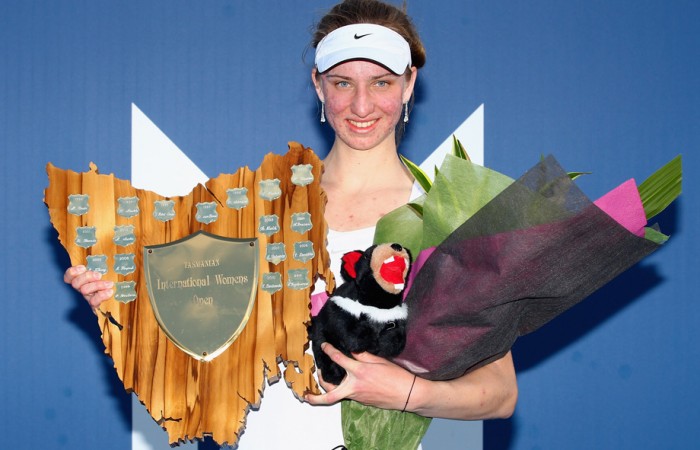 Young German Mona Barthel won her first WTA title at the Moorilla Hobart International on Saturday – but it’s only added to her stress.

A qualifier who barely expected to make the main draw, let alone win the final, Barthel was frantically working out how she would get to Melbourne in time to be ready for her first Australian Open.

The world No.64 completed a stunning week, adding top seed Yanina Wickmayer to a giant-killing run with a 6-1 6-2 demolition in the decider.

It was her eighth-straight win at the tournament, where she had also taken out the second, fourth and fifth seeds and became the first qualifier to lift the trophy.

No one expected it, least of all the quietly spoken 21-year-old.

“I have to relax now a little bit and of course I will celebrate,” she said.

“But I have to think about the next match.

“I play again on Monday (at the Open) so I have to go today and try to get the flight to Melbourne so it’s a little bit stressful right now.

“I will try to go to the (Melbourne Park) centre and have a look around.

“I’ve never been there before so I will look everywhere and see and then I will try to have a hit … try to get used to the courts.”

Barthel was a picture of composure and precision in the decider, fittingly finishing the tournament with an ace after landing 82 per cent of her first serves.

Belgian Wickmayer appeared off colour from the start as Barthel flew out of the blocks, racing to a 4-0 lead in the first and converting her first set point with a sizzling forehand winner after just 20 minutes.

A Wickmayer comeback looked possible in the second set as she cranked up the power but her game remained erratic and Barthel added three more service breaks to her three from the first set.

“In a couple of moments I was a little bit nervous and I was playing a little bit passive but I won 6-1 6-2 so I think most of the things I did right,” Barthel said.

Barthel took her ranking from No.208 at the end of 2010 to her current career-high and plays doubles partner and world No.75 Anne Keothavong in the first round of the Open.

But she is beginning to believe she belongs in the big matches.

“I did it once now so I can do it maybe another time,” she said.

“I’m just really happy with the way I played and I think I can go even one step further.”