Known best for the grunts she makes on court, Victoria Azarenka will instead head to Melbourne Park with plenty of noise being made about her Australian Open chances after the Belarusian took out the Sydney International on Friday night. The 22-year-old overcame a second-set lapse to down defending champion Li Na 6-2 1-6 6-3 at Sydney Olympic Park.… 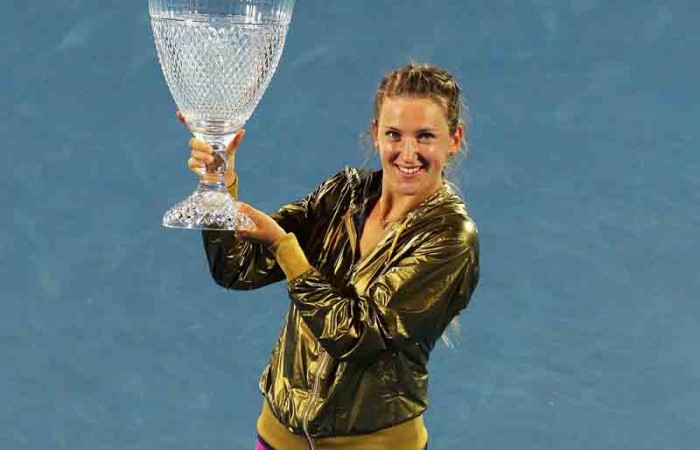 Known best for the grunts she makes on court, Victoria Azarenka will instead head to Melbourne Park with plenty of noise being made about her Australian Open chances after the Belarusian took out the Sydney International on Friday night.

The 22-year-old overcame a second-set lapse to down defending champion Li Na 6-2 1-6 6-3 at Sydney Olympic Park.

One of the noisiest players on tour – who grunted her way to the 95 decibel mark during her semi-final run to Wimbledon last year – Azarenka instead turned up the volume on her powerful ground strokes, giving Li the run around from the back of the court.

While much of the focus this week has been on the battle for the world No.1 ranking between incumbent Caroline Wozniacki and her suitor Petra Kvitova, Azarenka has quietly consolidated her No.3 standing and must be considered a serious threat in Melbourne.

A 2005 junior Australian Open champion, Azarenka was a stealthy mover on the tour last year, rising from tenth in the world to her current ranking thanks to three titles and consistent results at the four grand slams.

With nine of the top ten women playing in Sydney in a virtual grand slam strength field, Azarenka was delighted with her form.

“I’m glad the way I played here through those battles that I went through, so I really tested myself before a big event.

She blasted through the first set on Friday night, ripping winners at will, particularly on the backhand flank.

But the errors that tallied so swiftly for Li in the opener began to dwindle in the second set, China’s No.1 player taking it comfortably as she began to eye off her first tournament win since last year’s French Open.

After games had stayed on serve at 4-3 in the decider Azarenka then found an extra gear, breaking her opponent to serve for the match.

Also known on occasion for her fragile temperament, Azarenka steeled herself during a tense game to serve out the match, calmly blunting several break back opportunities to snare the title.

Despite the loss, Li will also have plenty of confidence heading to Melbourne.

She is 18-2 in singles matches in Australia over the last year, her only losses across four tournaments coming on Friday night and in the final of the grand slam opener of 2011 against Kim Clijsters.

She felt her game had returned after a lacklustre back-end to the year.

“I was feeling my confidence was back,” said Li. “Now why should I worry? Nothing to worry (about).”

“I think now it’s much, much better than the last half of the year, right? Still, step by step.”

Despite the great week, Li drops from No.5 to No.6 in the world rankings because she failed to defend her title points from 2011.

Samantha Stosur moves to No.5.