Ash Barty falls one match short of defending her US Open women's doubles title while Dylan Alcott's Grand Slam quest ends in the final of the quad wheelchair singles. In the quad wheelchair singles final, Dylan Alcott’s 23-match winning streak ended with a 6-1 6-o loss to Brit Andy Lapthorne in the final.

It ended the Australian’s quest for an historic calendar-year Grand Slam, with Alcott earlier in 2019 scooping the Australian, French and Wimbledon titles. 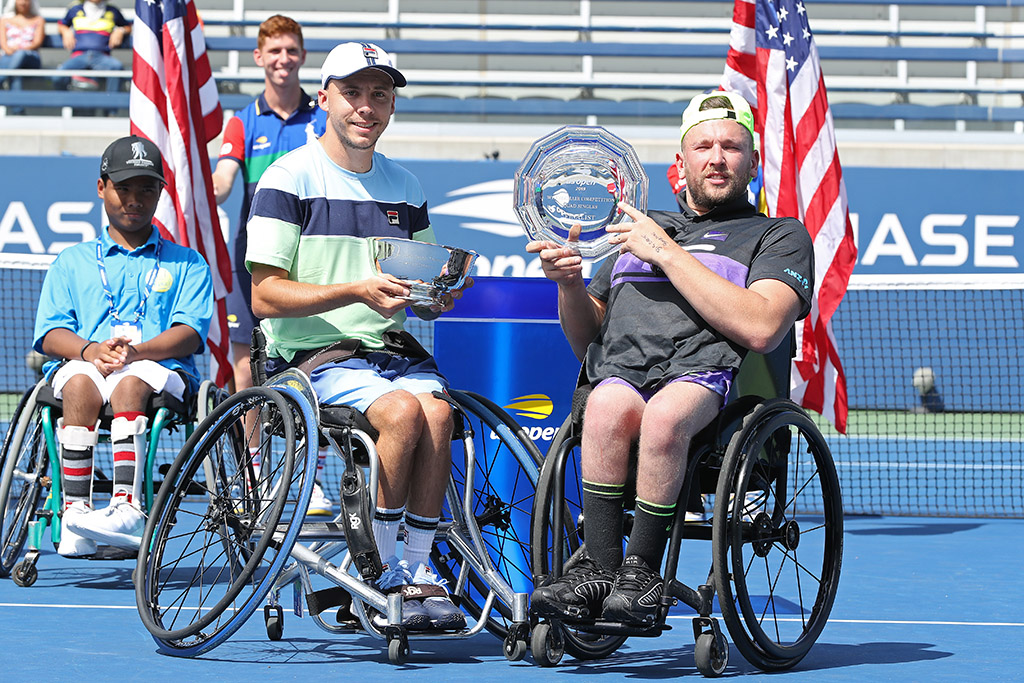 Barty, this year’s French Open champion, had been bidding to become the first player to claim back-to-back women’s doubles titles at Flushing Meadows in 12 years.

But the 23-year-old can instead console herself in the knowledge she’ll regain the world No.1 singles ranking on Monday after she and Azarenka were unable to convert their clear dominance into victory over Sabalenka and Mertens.

The Aussie-Belarusian duo, both major singles champions, let slip a 3-1 lead in the first set and then twice dropped serve from 40-15 up in the second. They especially rued not being able to convert any of four break points after Mertens was trailing 0-40 on serve at 3-4 in the eighth game of the second set.

“A few games we lost from 40-15 up, a couple of missed opportunities with volleys. There’s probably half a dozen points, maybe even less, that would turn a match,” Barty said.

“But they’re the what-ifs that we can’t worry about and can’t stress about. I think we still have to celebrate the fact that we’ve had a hell of a tournament.”

Not to be today but a hell of a tournament mate. Proud of our fight. Thank you New York! pic.twitter.com/Qoq2Ls8YuD

Despite the defeat, Barty remains in strong contention to become the first player to qualify for both singles and doubles at the WTA’s season-ending championships in Shenzhen, China. Karolina Pliskova was the last to do so in 2016.

Barty is the only player to have secured her entry in singles and is now in ninth spot with Azarenka in the Race to Shenzhen, which features the top eight doubles pairings of the year.

Alcott had beaten Lapthorne for the loss of just two games when they met in the Wimbledon final in July.

In the round-robin stages this week in New York, Lapthorne held four match points before Alcott ran away with victory in three sets.

Lapthorne must have known he was getting closer; on Sunday he was the superior player when they met again.

Alcott’s loss marks the Australian’s first defeat in either singles or doubles this season, and ends a winning streak in singles dating back to September 2018. He was also the defending champion in New York.

Not my day today. Outplayed and am absolutely gutted. Apologies to everyone. I let everyone down with that performance but will be back.. As usual thanks for the overwhelming amount of love xx #usopen pic.twitter.com/0XAyJHh8Tf