Andy Murray has enjoyed a perfect warm-up to the Australian Open by claiming the Brisbane International. 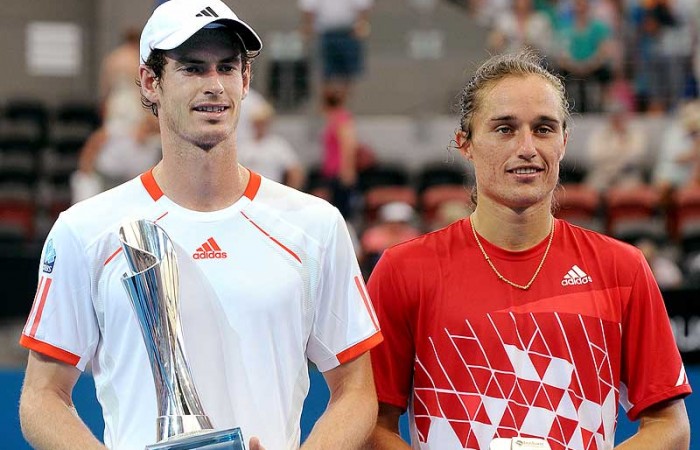 Andy Murray has enjoyed a perfect warm-up to the Australian Open by claiming the Brisbane International with a 6-1 6-3 final thumping of Alexandr Dolgopolov.

Murray blitzed the off-colour Ukrainan world No.15 in just 65 minutes on Sunday to take the Roy Emerson Trophy.

Nursing a groin problem he sustained in his semifinal win over Gilles Simon, Dolgopolov lost nine straight games in a Murray onslaught midway through the decider after holding his opening service game.

The third seed struggled to serve at just 46 per cent in the first set and Murray took full toll by breaking twice to speed through it in 26 minutes.

In contrast, the Scottish world No.4 was dominant and didn’t concede a point on serve until he was serving for the set at 5-1.

The punishment continued well into the second set as Murray broke twice more to race to 4-0 before Dolgopolov finally held serve, raising his arms in mock triumph to the sell-out crowd at Pat Rafter Arena.

The hard-hitting Ukrainian, who lost to Murray in the quarterfinals of last year’s Australian Open, then managed to grab a surprise break and then hold for 4-3 to delay the inevitable.

With a tremendous 21-9 record in ATP finals, top-seeded Murray then rushed through the two final games for his 22nd career title.

With new coach Ivan Lendl in his player’s box for both the final and semifinal win over Bernard Tomic, Murray looks in top shape for Melbourne Park.

Coming off a groin problem which prematurely ended his 2011 campaign, the 24-year-old blew off the cobwebs in unconvincing three-set wins over Mikhail Kukushkoin and Gilles Muller at the start of the week before hitting his straps.