Fitter than ever, Sam Stosur's not the only thing in good shape on the Australian tennis circuit this summer. 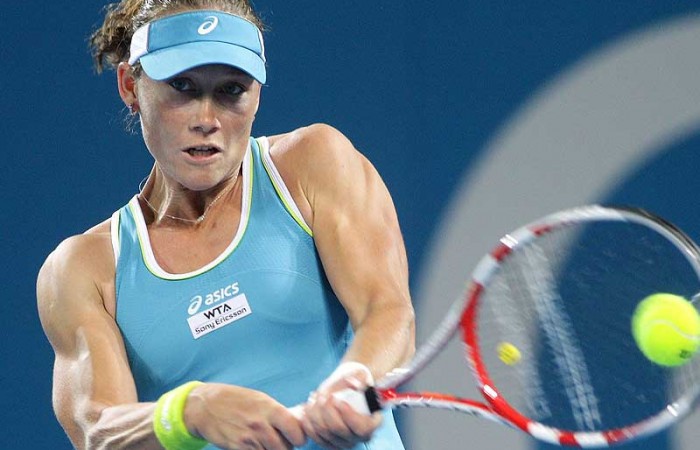 Fitter than ever, Sam Stosur’s not the only thing in good shape on the Australian tennis circuit this summer.

The sport itself – reinvigorated by Stosur’s US Open success – is also in fine health as indicated by crowd figures at the start of the Brisbane International and Australian Open ticket sales.

The day session drew a crowd of 12,595 – almost 4000 better than the previous best – while Pat Rafter Arena was also packed out in a record Monday evening session with 5883 cheering Stosur on to a 6-2 6-3 first-round victory over Anastasiya Yakimova.

But Tennis Australia officials say the Gold Coaster’s grand slam breakthrough at the US Open, plus Bernard Tomic’s Wimbledon quarter-final run, is driving interest in the game.

As well as ticket sales being up, junior registrations in TA’s hotshots program is at a record high.

By no means are officials shouting from the rooftops that tennis is back but the early signs are more than encouraging at a time fading poster-boy Lleyton Hewitt is in the twilight of his career.

The Brisbane International also has a record-high six Australian men in the 32-strong main draw at QTC, with Tomic and fellow 19-year-old James Duckworth already in the second round, and Matt Ebden, Marinko Matosevic, Ben Mitchell and John Millman playing on Tuesday.

The modest Stosur isn’t into claiming credit but on Monday night admitted it was nice to see more interest in the sport through her US Open triumph.

“If that’s the impact a player can have on their home tournament and in their home country then that’s fantastic,” she said.

“When you’ve got a player that’s doing well it always feeds down.

“There’s not too many tournaments in the world that you have a sold-out first couple of days.

“It shows how great the event is and how excited and popular tennis is becoming again in Australia.”

Tipped by Williams to win more grand slams in 2012, Stosur said she was the fittest she’d ever been after crusing past Belarussian Yakimova in 80 minutes.

“I’ve done everything I possibly could to get myself in the best shape I can be,” the world No.6 said.