Novak Djokovic brought the curtain down on his stunning 2011 season with a 6-2 6-1 thrashing of Spain's David Ferrer. 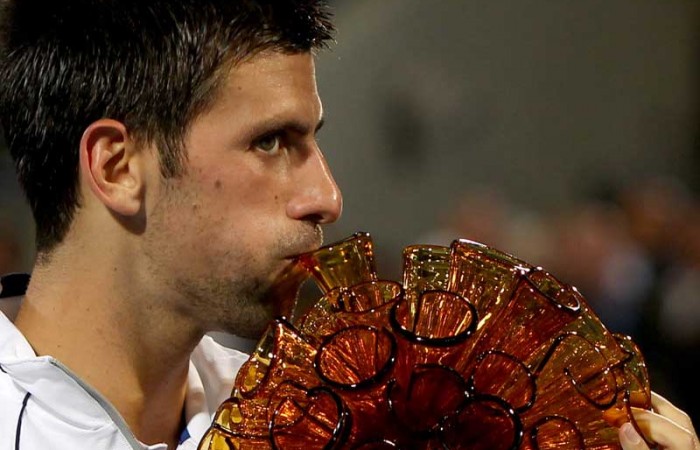 Novak Djokovic brought the curtain down on his stunning 2011 season with a 6-2 6-1 thrashing of Spain’s David Ferrer in the final of the World Tennis Championship exhibition tournament in Abu Dhabi on Saturday.

Having already crushed Roger Federer by the same score in the semi-finals, world No.1 Djokovic looked on top of his game at the International Tennis Complex as he eased past world No.5 Ferrer to claim the $US250,000 winner’s prize.

The Serbian concluded the match with consecutive aces, signing off for 2011 in fitting fashion after 12 months in which he won 11 tournaments, including the Australian Open, Wimbledon and the US Open.

“It’s been a fantastic experience the last couple of days,” said Djokovic.

“I had a great preparation here in Abu Dhabi. Everyone was very kind, and the crowd makes this tournament even better. We had a lot of fun and I hope (the spectators) did, too.”

Asked if he could repeat his 2011 successes next year, Djokovic said: “I think, yes. Nothing is impossible, if you believe.

“I think the crucial couple of weeks is now, for me to prepare for Australia. We’ll see. It’s a long year and a difficult task, but I’m looking forward to it.”

Ferrer had beaten France’s Jo-Wilfried Tsonga in a three-set quarter-final before downing compatriot Rafael Nadal in straight sets in the last four, but he had no answer to Djokovic’s athleticism and poise.

“It was difficult,” admitted Ferrer.

“I know why Djokovic is No.1 in the world. He plays a really good game, and he was better than me.

“I made the semi-finals the first time I was here (in 2010) and the final this year, and maybe I can come back next year and win.”

The match was a repeat of the final of the last tournament, which Nadal also won in straight sets to claim his second consecutive title at the event.

Federer, 30, said he was happy with the overall standard of his play, despite his two defeats.

“I struggled throughout the weekend because I played some really good players,” he said.

Both Nadal and Federer will now travel to Qatar, to compete in the Doha tournament that marks the start of the 2012 ATP season.