It was steady progression for the top seeds in the boys' and girls’ draws at the Optus 12s Australian Championships at Melbourne Park today. 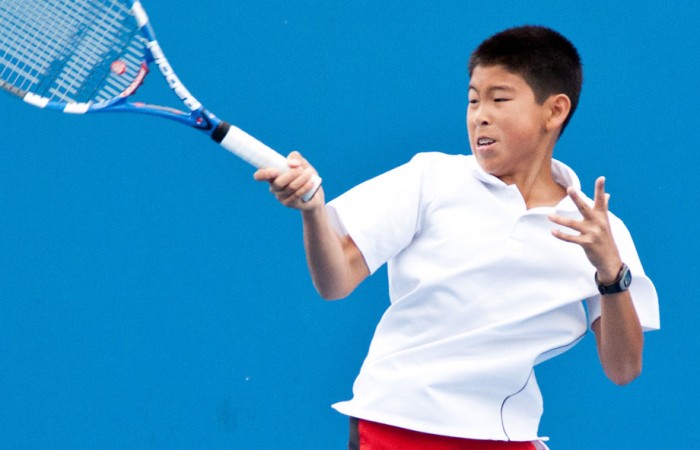 It was steady progression for the top seeds in the girls’ draw at the Optus 12s Australian Championships at Melbourne Park today, with No.1 seed Seone Mendez and third seed Destanee Aiava both winning their quarterfinals matches 6-1 6-0.

Mendez was in fine form throughout her encounter against No.9 seed Jaime Fourlis, and kept her body language positive by constantly encouraging herself and bouncing around on her toes between points.

She raced ahead 5-0 in the second set thanks to artful, consistent play, and weathered a barrage of groundstrokes from Fourlis in the final game, who had clearly decided to throw caution to the wind and swing for the fences when facing the huge deficit.

The ninth seed’s tactic was not a bad idea, but she became more erratic when playing in this manner. Soon Mendez had wrapped up the game and the match to move through to the semifinals.

“I constructed my points well, I was hitting it pretty well, and I stuck to my plan,” she said following the match on Court 10.

Mendez will next face Aiava, who’s brutal, relentless hitting from the baseline proved too strong for 12th seed Renee McBryde.

McBryde battled hard and retrieved everything Aiava threw at her, forcing the third seed to work hard for the win. Yet despite the final game going to deuce and seeing Aiava commit some unforced errors, she completed a similarly convincing win.

Mendez said she had played Aiava a year earlier and lost 6-0 6-1, but said she was more confident coming into this encounter.

“I’ll know how to play her and I’ve worked on my game a lot, and [I’m] playing pretty well this tournament,” she said.

Working on her game has involved watching lots of tennis. Mendez said she watches the sport whenever it is on television – even taping matches she misses to watch later – especially those featuring Roger Federer, Rafael Nadal, Serena Williams and the recently-retired Justine Henin.

“I watch how they play, how their mental side is, and what tactics they’re using against different opponents,” she said.

Over on Court 13, 15th seed Petra Hule upset No.5 Monique Belovukovic in straight sets to take her place in the semifinals.

Hule, who in the previous round had defeated No.2 seed Julia Makridis 6-2 6-1, kept her impressive form up against Belovukovic. Her hard, flat, deep shots proved devastating against the fifth seed, who valiantly chased everything and threw up several moon balls in an attempt to disrupt Hule’s rhythm.

Displaying far too much power and aggression from the baseline, Hule completed the 6-3 6-3 win on her second match point.

She will next face No.10 seed Alexandra Bosovic, who progressed to the semifinals in a walkover after Chinese opponent Qian Hui Tang pulled out of the tournament.

In the boys’ event, No.1 seed Benard Nkomba moved through to the semifinals after brushing aside the challenge of fifth seed Alexander Crnokrak 6-4 6-2.

Crnokrak is one of the few 11-year-olds left in the draw – most of the competitors are aged 12 – and he acquitted himself well in the opening set. Yet he was eventually worn down by a combination of Nkomba’s consistency and shot-placement in the second.

The fifth seed struck a double-fault to fall behind 2-4, and Nkomba soon smacked a wrong-footing cross-court forehand winner to take a 5-2 lead. He wrapped up the match shortly after.

Also progressing to the final four was the sturdily built fourth seed Nathanael Consalvo, who accounted for No.8 seed Matthew Romios.

After taking a tight first set, Consalvo blasted two groundstroke winners – one off each wing – to move ahead 5-2 against an increasingly despondent and injury-hobbled opponent.

Another huge forehand in the next game from the fourth seed forced the error from Romios’ racquet, handing Consalvo a 7-5 6-2 victory. Despite injured opponents often proving difficult to finish off, Consalvo said he had not focused on that.

“I even have an injury in my leg as well, but I was able to concentrate and also use [Romios’ injury] to my advantage,” he said.

“I think my serve, my consistency [worked well today]. Movement on the court was OK [too].”

He will next face the winner of the match between No.7 seed Adam Walton and 14th seed Todd Millington, in a match that was still being slugged out on Court 13.

In the highest quality match of the day, third seed Chase Ferguson overcame an extremely tough challenge from No.6 seed Daniel Groundwater before finally progressing 6-7(4) 6-1 6-2.

The final set was closer and more intense than the scoreline indicates. With both players launching themselves into their groundstrokes, covering the court explosively and displaying their full repertoire of shots, it was an entertaining spectacle.

Ferguson moved ahead 3-0 in the final set and seemed to be on top of an increasingly frustrated Groundwater, only for the sixth seed to get on the board in the next game thanks to a bundle of Ferguson errors.

But the third seed did just enough to complete the job, staying true to his powerful ground game despite his mounting error count and displaying just a touch more composure and consistency to set up a semifinal bout with Nkomba.