It was a mixed day for the seeds in the Optus 12s Australian championships as number one seeds Seone Mendez and Bernard Nkomba both progressed through to tomorrow’s quarterfinals while their closest rivals crashed out. 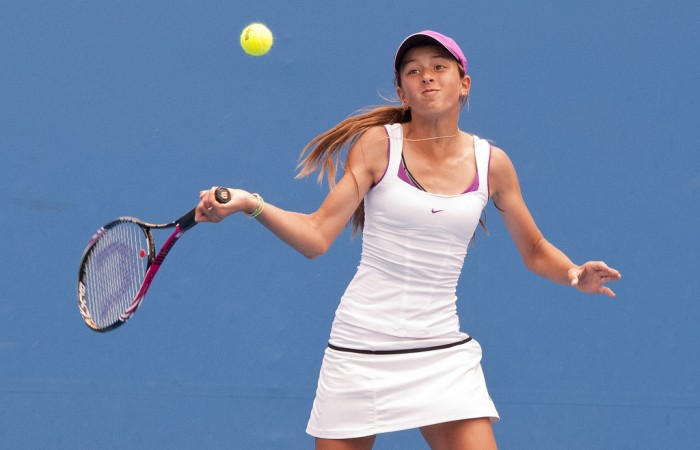 It was a mixed day for the seeds in the Optus 12s Australian championships as number one seeds Seone Mendez and Bernard Nkomba both progressed through to tomorrow’s quarterfinals while their closest rivals crashed out.

Girls’ second seed Julia Makridis was upset thanks to a dominant performance by South Australian Petra Hule who won their match 6-2 6-1.

The rest of the third round results went relatively to script with most of the remaining seeds ensuring their place in the quarterfinals.

China’s Qui Hui Tang has had an impressive tour of Melbourne, helping China to the final of the 12s team event last week and today defeating highly fancied opponent and fourth seed Aleksa Cveticanin in a hard fought 4-6 7-6 (4) 6-4 affair.

The match was the longest on the girls’ side of the draw, lasting two hours and thirty- two minutes.

The news was not as positive for her Chinese teammate Zhao Lee who lost her encounter with third seed Destanee Aiava 6-3 6-2.

Aiava has shown brilliant form in this tournament and will most likely pose the greatest threat to Mendez for the title.

Number five seed Monique Belovukovic was forced to fight for her position in the quarterfinals as she took out a tough 7-6 (4) 6-4 encounter with Daniela Kovacevic.

In other girls’ results ninth seed Jaimee Fourlis, tenth seed Alexandra Bozovic and number twelve seed Renee McBryde all progressed to the next stage of the tournament.

On the boys side of the draw third seed Chase Ferguson defeated sixteenth seed 6-4 6-1 in one hour and thirty- two minutes while number four seed Nathanael Consalvo cruised to a 6-4 6-2 victory over Rinky Hijikata.

After taking the first set of his match comfortably 6-1, fifth seed Alexander Cronkrak had to fight for his spot in the quarterfinals when Mayez Elrich staged a late come back. Cronkrak eventually took out the second set 7-5.

The quarterfinal stage is set to kick off tomorrow. Big match- ups for the day will include Mendez and Fourlis for the girls while boys’ top seed Nkomba will be challenged by Cronkrak.