Update 4:50 pm. Marinko Matosevic has defeated No.5 seed James Duckworth to secure a wildcard into the main draw of Australian Open 2012. 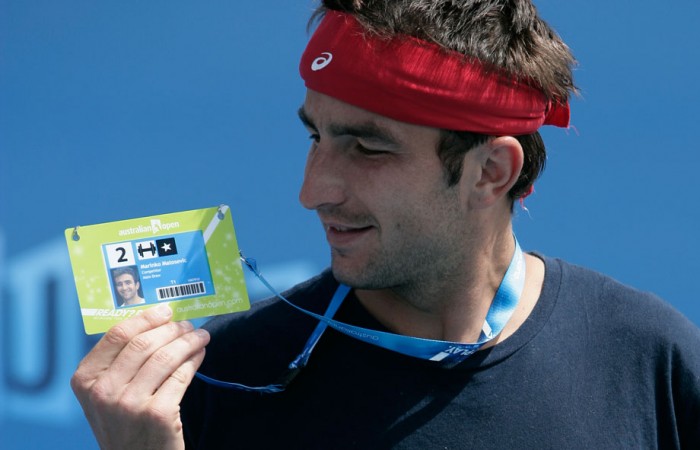 But it was Matosevic who swept all before him today, cruising to a very comfortable straight-sets victory 6-4 6-1 6-2 and booking his place in the main draw of the 2012 Australian Open for the second consecutive year.

The match was a fairly one-sided affair, with Matosevic in control from the outset, moving smoothly, striking the ball well, and looking very solid on serve. In fact, he did not drop serve all match and only faced break points in one game.

The pair started evenly, but at 3-3 Duckworth stretched wide during a rally and rolled his right ankle.  Despite continuing, he dropped serve and then asked for the trainer at the change, using all his allotted time to get his ankle worked on and strapped before returning to the court.

While he seemed to be moving freely, it may have had more of an impact than was clear, as a distinct change came over the match from that moment onwards. Duckworth appeared listless and increasingly frustrated – and Matosevic never looked back. The games went with serve for the rest of the first set, with the initial break enough for Matosevic to take it 6-4.

As the second set began, it looked like Duckworth was trying to end the rallies a little more quickly, potentially due to his ankle injury. He consistently pulled the trigger on his ground strokes too early in the rally and more often than not came up with the error. Matosevic again pulled away, with Duckworth’s disappointment beginning to surface. At 5-1 down, he looked to have all but conceded the set, slamming a forehand return into the bottom of the net, and eventually giving the set away 6-1.

The third and final set brought more of the same and in the fourth game, Matosevic again made his move, breaking for 3-1.  It was now Matosevic in a canter and another Duckworth error gave him the final set 6-2.

After the match, Matosevic addressed the Duckworth injury by saying, “I tried to just put it to the back of my mind and get the job done.”

“I know his game pretty well,” he added. “[Duckworth] is a very good player and I wish him all the best.”

Matosevic said he had a tough year in 2011 with lots of ups and downs but was clearly pleased with how things went today. “It’s a great opportunity and an honour and privilege to get a spot in a Grand Slam by winning this event.”

Matosevic achieved his highest ever world ranking of 131 in March and made the Australian Davis Cup team for the first time before an injury at the US Open disrupted his year and saw him drop to 201 by year’s end.

But he is upbeat about his future. “I beat a stack of guys in the top 100, some guys in the top 50 … so I’m definitely confident of getting a two-digit ranking going further,” he said.

“I travelled most of the year with Matt Ebden and saw him jump into the top 100 … and not just him [either].”

Duckworth, on the other hand, was looking for a first-time berth in a Grand Slam main draw. He has come off a breakthrough year, ending it ranked 274 in the world, courtesy of four Futures event wins on clay in Italy and Poland.

Despite the loss today, he has played some extremely solid tennis this week and looks on the brink of further success. His semifinal victory over top seed Greg Jones in the play-offs was a highlight.

He will now look ahead to the Australian summer and may still be offered  a discretionary wildcard into Australian Open 2012, but his fate is now out of his hands.