Both today’s Australian Open 2012 Play-off finals look set to be entertaining encounters with established players up against potential stars of the future. 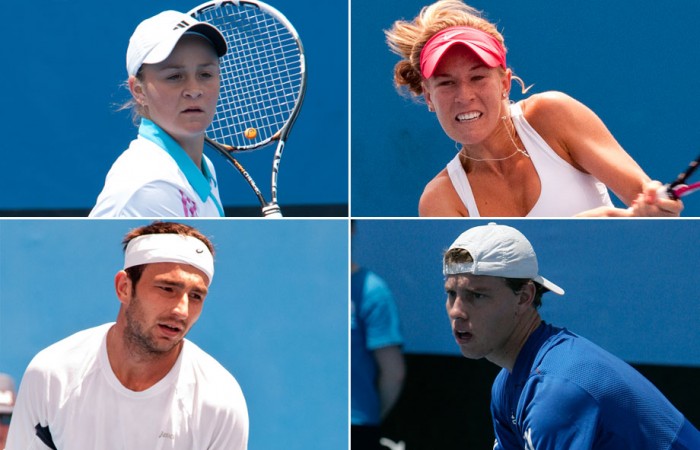 Both today’s Australian Open 2012 Play-off finals look set to be entertaining encounters with established players up against potential stars of the future.

In fact, both last year’s winners in Marinko Matosevic and Olivia Rogowska find themselves in finals yet again, but this year each is up against a relative newcomer. And, as always, there’s plenty at stake with a spot in the main draw of the 2012 Australian Open up for grabs.

First up on Court 6 it’s Rogowska versus Ash Barty. Over the past fortnight we have witnessed the rise and rise of superstar youngster Barty. After winning the junior event at Wimbledon, the focus has certainly centred on the young lady from Queensland, and she is delivering.

After whipping through the Optus 18s Championships without the loss of a set, she entered the play-offs as a wildcard with seemingly nothing to lose. She started her campaign by ending the much-touted winning streak of Casey Dellacqua and hasn’t looked back, winning her round-robin matches and her semifinal all in straight sets. No doubt, the 15-year-old is on a tear.

Barty said prior to the Optus 18s that she was very focused on the play-offs, and has since taken  her success very much in her stride. After her semifinal win yesterday, she said “I’m just going to go home, relax … and think about [the final] tomorrow.”

Her opponent is the event’s second seed, Olivia Rogowska. She too has been untroubled this week and is in solid form coming into the final. The 20-year-old from Melbourne finished 2011 ranked 178 in the world and is looking to win her way straight into the Australian Open main draw for the second time in a row, having won this event last year.

After her semifinal win yesterday, Rogowska said she was very much looking forward to the final.

“It’s such a great atmosphere, lots of people come to watch and it’s streamed live, so it’s great practice for January,” she said.

Rogowska and Barty are roommates this week and get along very well off the court. As members of the Australian Institute of Sport, they have also practiced together often and know each other’s game very well. All that said, however, the pair has never faced each other in a competitive match.

“She [Barty] is playing really good tennis. She’s going out there with nothing to lose, and they’re the most lethal kind of players. So I’m just going to go out there and just try and forget who I’m playing and focus on myself and my game plan,” Rogowska said.

“She’s a very solid competitor and I’m going to have to play some top tennis to beat her.”

Following the completion of the women’s event, which will begin at 11:00 am, 26-year-old Matosevic will take on fifth seed James Duckworth.

Matosevic, a Melbourne local, has had a varied year in 2011, reaching a career-high ranking of 131 in March with some solid results, including quarterfinals appearances in Dallas and Nottingham. However, he finished the year ranked 201, which left him outside the 2012 Australian Open main draw and needing a wildcard to avoid having to compete in qualification.

Duckworth has had a breakout year in 2011 and ended it ranked 274 in the world. Following a knee injury at the start of the year, he decided to ply his craft on the clay courts in South America and Europe. He had a great deal of success, making five Futures finals – winning two in Italy and one in Poland.

Today’s match-up will see the heavy top-spin and quick court movement of Duckworth up against the natural ball striking of Matosevic. Their temperaments may also prove an interesting contrast as Duckworth is well-known for a level-headed approach, which belies his years, while Matosevic rides the highs and lows of every match and his emotions are always close to the surface.

In looking ahead to the final, Duckworth said Matosevic “hits through the court well … it’s going to be a tough match.”

Matosevic, who has added to his overall workload by training right through the week, said that he had been practicing with Duckworth just prior to the play-offs.

“I know him pretty well,” he said.

“He has had a breakthrough year and I am really looking forward to [the match].”

The last time they met, which was a couple of years ago, Matosevic prevailed, but a lot of water has passed under the bridge since then.

Today’s finals will be live streamed on tennis.com.au, with the preview show beginning at 10:30 am. Coverage of the women’s final will begin at 11:00 am, followed by the men.