Sixteen has become four in the women’s draw of the Australian Open 2012 Play-off, with Olivia Rogowska, Ashleigh Barty, Arina Rodionova and Bojana Bobusic the best performed players in their respective groups to take their place in the semifinals. 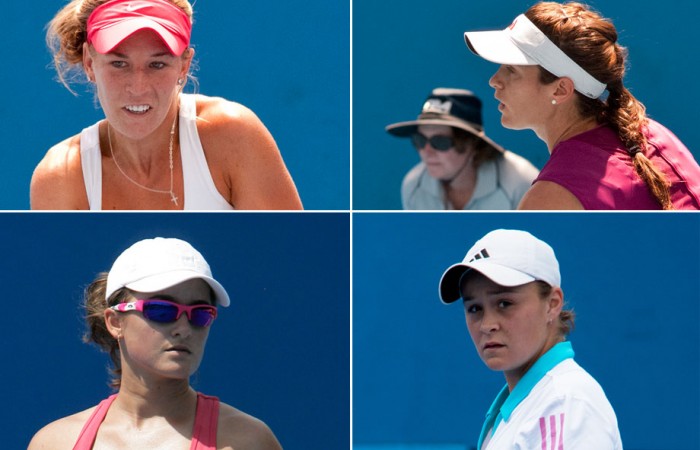 Sixteen has become four in the women’s draw of the Australian Open 2012 Play-off, with Olivia Rogowska, Ashleigh Barty, Arina Rodionova and Bojana Bobusic the best performed players in their respective groups to take their place in the semifinals.

While the men slogged it out at the quarterfinal stage of their event in sweltering, windy conditions at Melbourne Park on Friday, the women enjoyed a rest day.

Second seed and defending women’s champion Rogowska enjoyed a morning practice session then used her free time to catch some of the James Duckworth–Ben Mitchell match on Court 6.

The Victorian said she had been eating, sleeping and preparing well and was feeling good going into her match against Bobusic.

“[Today I will] chill out, maybe watch a movie, just relax and try and stay in a good positive frame of mind for tomorrow,” she said.

“I’ve been playing some good tennis. I’ve played three really solid matches and every match has been getting better, so I’m feeling pretty confident and hopefully [Saturday] will be even better than before.”

Rogowska has coasted through the draw, not dropping a set in three matches. It’s been a similar story for Barty and Rodionova, with both players undefeated prior to facing off in their semifinals matches today.

Barty has been the surprise packet of the event. While her talent has never been questioned, the 15-year-old has roared past a series of more experienced and higher ranked players, winning all of her matches in straight sets.

Her stunning upset of in-form No.1 seed Casey Dellacqua has been the talking point of the December Showdown so far. Yet after comfortably winning the Optus 18s Australian Championships in the week before the play-off, Barty said she simply entered the event with the intention of having fun.

“I’m not too worried about the score at the moment [in this event] so I just came out here wanting to enjoy it,” she said after defeating Dellacqua.

Rodionova, who recently joined sister Anastasia as a naturalised Australian citizen, was forced to work slightly harder to qualify.

Easily dispatching her first two opponents in round-robin play, the former Russian then faced a winner-take-all match against the also-undefeated No.3 seed Isabella Holland, progressing after a hard-fought 6-3 0-6 6-4 victory.

The only semifinalist to have dropped a match during the play-off has been the 24-year-old Bobusic. The fifth-seeded Western Australian lost her opening match to Storm Sanders, and only scraped through after defeating exciting junior prospect Viktorija Rajicic in a final set tiebreak.

In Group D standings, Bobusic finished level with Sally Peers on two wins and one loss, but moved into the semifinals thanks to beating Peers.

Despite going into the match with better form on paper, Rogowska – the defending champion at the play-off event – said she would not be underestimating Bobusic.

“I’ve done well against her but she’s been playing really well lately so I’m expecting a tough match. We’ve trained a couple of times prior to the play-offs and she’s hitting the ball really well so I’m definitely fired up and ready to play,” Rogowska said.

“[I have] good memories from last year saving match points in the final against Jelena [Dokic] who’s a very tough player. I always play well at the play-off so I enjoy playing here … it’s a good feeling knowing that I won it last year and I’m definitely trying my best to defend.”

Saturday’s semifinals begin at 10:00 am. One match will be streamed live on tennis.com.au along with the Battle of the Codes.