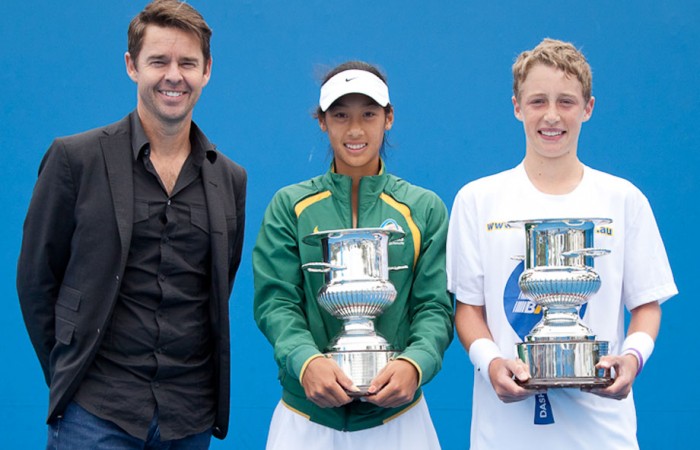 Polmans battled No.3 seed Kyle Butters from New Zealand, giving away several inches in height but showing no less talent or heart, rebounding after a disappointing second set to claim the title with a 6-3 1-6 6-2 win.

Hon defeated the highly fancied top seed Sara Tomic, younger sister of top 50 star Bernard. Although Tomic got off to an ideal start she could not capitalise on her advantage, and Hon came roaring back to post a 6-4 1-6 7-5 victory in two hours and 40 minutes.

The boys’ final was even longer, lasting two hours and 48 minutes before Polmans pocketed the final point. That was in part due to a lengthy opening set that featured several deuces before the top seed’s consistency eventually helped him prevail.

Polmans got off to the perfect start, moving ahead 3-0 in a display reminiscent of Russian Nikolay Davydenko, a comparison drawn through his slight frame, speedy court coverage, and powerfully and accurately-delivered groundstrokes taken very early, especially on the backhand.

Butters is more in the Andy Murray mould, thanks to his gangly frame, deceptively quick movement yet, above all, a generally negative demeanour. This was not helped when his errors contributed to another Polmans’ service hold and a demoralising 0-4 deficit.

But some powerful groundstrokes in the fifth helped him find his way onto the scoreboard, and soon Butters had reeled in one of the service breaks when Polmans double faulted after a torrid deuce game.

Polmans donned his trademark legionnaires hat from that point and it seemed to do the trick – the diminutive top seed landed a big return to bring up two break points, and converted following another error from Butters, prompting the Kiwi to fling his racquet again.

Polmans served for the set and was broken to love, but refused to be downcast, responding strongly in the next game and benefiting from some Butters errors to take a one-set lead.

Buoyed on by a large, supportive contingent of New Zealand teammates and adjusting well to the breezy conditions, Butters romped through the second set and looked to have imposed his physical advantages on the match.

But in a commendable effort, Polmans reversed the momentum and coasted to the title.

At the same time over on Court 5, Tomic and Hon were engaged in an absorbing, high-quality battle. They certainly looked the part – Tomic donned Maria Sharapova’s 2011 Australian Open dress while Hon wore the outfit Sharapova paraded at this year’s Wimbledon – and their standard of play showed that they may one day battle on the biggest stages on which the Russian regularly stars.

Hon made the early running, holding serve and moving ahead 15-40 in the second game. Yet Tomic slammed an ace and a backhand winner to erase that disadvantage, and went on to hold. It formed part of a run of 10-straight points for the top seed, which Hon eventually ended with a passing shot down the line.

Tomic maintained her break for the remainder of the set but knew she had a fight on her hands – this was evident in the fifth game when Hon scrambled magnificently to retrieve Tomic’s powerful drives and eventually forced the error to hold serve.

The second seed clearly gained confidence from playing her opponent so close, and this showed when she streaked through the second set to level the match.

A torrid battle followed in the third, but against everyone’s expectations it was the No.2 seed who showed the greater determination and calm under pressure to wrap up a tight final set and claim the trophy.