Friendships aside as Saville strikes Bolt 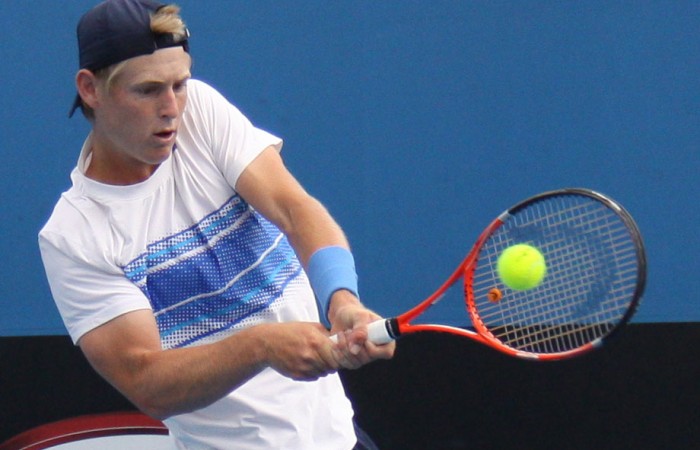 Quarterfinals day at the 2011 Optus 18s Championships began under blue skies with the boys first taking to the courts around 9 am.

Due to earlier results, and in a relative quirk of the draw, the most hotly anticipated quarterfinal of the morning pitted the two top seeds, Luke Saville and Alex Bolt, against one another. The two South Aussies know each other well having grown up through the junior ranks together and the match looked set to be a beauty.

Both players have had an eventful journey through to the quarterfinals, each losing a match during the round-robin stage and therefore not winning their respective groups which in part led to the early match-up.  The withdrawal due to injury (abdominal strain) of another South Australian, qualifier Brad Mousley, also contributed.

Bolt, a solidly built left-hander with a powerful all-round game, made the early running in this match, stretching Saville with some sweet hitting from the baseline mixed with the odd successful foray to the net.

He took an early break and quickly ran out to a 4-1 lead. The match continued to be played largely from the baseline and games remained on serve, but with Bolt serving for the set at 5-3, he faltered with some uncharacteristic errors, allowing Saville a relatively easy break to get himself back in the set.

From that point on there was a distinct shift in momentum, with Saville noticeably lifting his intensity and focus. At the same time, across the net, Bolt was becoming increasingly cautious. He cut a forlorn figure as Saville raced away to claim the first set 7-5, finishing it off with a crisp forehand volley into the back corner.

Bolt regained his composure to hold serve in the opening game of the second set, but only after a series of deuces was he eventually able to shrug Saville off. Some huge serves and a questionable line-call that went in his favour also gave the second seed a helping hand.

In an example of the good spirits in which this match was played, Saville initially approached the umpire’s chair after the call, but then turned to his good mate at the other end and offered, “What do you think, Bolty?” The moment was easily diffused and the match continued.

Games remained on serve with Bolt continuing to hit the mark with some big bombs. Saville had also been looking reasonably untroubled on his own serve but in the fourth game Bolt saw an opening at 30-40 when Saville looped a forehand long.

Soaking up the pressure extremely well, Saville aced for deuce, but Bolt once more opened the door with a cracking forehand down the line. Saville levelled but at the third deuce Bolt, once again, unleashed with an untouchable forehand to the opposite corner. This time, he clinched the break as Saville sailed a forehand over the baseline.

With an air of authority, Bolt then held to love, making it 4-1 in a mirror image of the first set.  And the similarities continued. Serving at 4-2, Bolt again stumbled; sending two easy forehands into the net, and with a superb lunging backhand volley, Saville broke back.

Bolt then had his chances in the next as Saville himself made a few unforced errors and, in fact, Bolt even brought up a break point after a simple overhead, but Saville held firm and levelled things up at four apiece.

Bolt started the next service game with a double fault, hitting the ball away in despair. He followed that up by hitting a potentially long passing shot from Saville, allowing the right-hander to move in and finish off the point for 0-30. Then, after a slicing low approach shot from Saville shot away for a winner, Bolt found himself facing consecutive break points.

Once again though, he looked to his serve to get out of trouble and it didn’t let him down. However, with game point in hand, Bolt double-faulted for the second time in the game. After letting out a huge yelp of anguish, he steeled himself and, with pressure bearing down on him, served the game out once more.

Saville continued to apply the heat and in Bolt’s next service game he broke through with some pinpoint groundstrokes providing three break points. Again, Bolt double-faulted, this time at the most critical of moments, thus handing Saville the game and the opportunity to serve for the match. Bolt’s disgust was evident, as he sent a ball sailing over the outside courts and picked up a code violation for his troubles.

Bolt barely sat down at the final change, and when play resumed Saville closed out the match with ease, taking the game to love, and the match 7-5 7-5, moving the reigning Wimbledon junior champ into a semifinal berth.

After the match, Saville was content with his game. “I hung in there really well today,” he said. “He had a lot of opportunities but I just managed to dig deep. “

“I played some really good tennis when it mattered.”

In playing a fellow South Australian, Saville said “Bolty and I are great mates, we’ve known each other for a long time, so it wasn’t easy to come out here and play against him today.”

“It was a bit strange to be playing him at this earlier stage too as we are the top two seeds, but we didn’t win our groups and it just worked out like that. “

At many stages during the match today, Bolt looked the better player and Saville agreed.

“Bolty is such a great ball striker,” he said. “He had a lot of chances today and he definitely could have won. It was a quality match and it was close.”

“But one of my great traits is my composure under pressure and that prevailed today.”

Saville also noted how pleased he was at the number of South Australian boys in the 18s. “I think we have the most of any other state, so that’s really exciting.”

Wildcard Chris O’Connell (NSW) continued his incredible winning streak with a 6-1 6-3 victory over WA’s Rhys Johnson to move into the semifinals.