Booming left-hander Alexander Bolt raced through to the 2011 Optus 18s Australian Championship quarterfinals this morning after taking down Jack Schipanski 6-3 6-4. 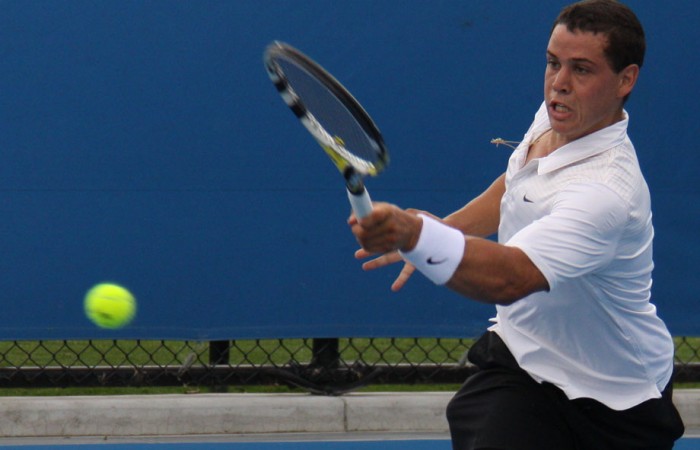 Booming left-hander Alexander Bolt raced through to the 2011 Optus 18s Australian Championship quarterfinals this morning after taking down Jack Schipanski 6-3 6-4.

Bolt, the second seed, often forced his opponent wide with his powerful first serve or devastating crosscourt forehand and dictated much of the play.

The two South Australians were familiar with each other’s style, having grown up playing tennis and training together for many years.

This familiarity was evident early with the match deadlocked at 3-3, neither player looking to break away.

But a characteristic monster first serve from Bolt saw Schipanski on the back foot, as the second seed approached the net and drilled the ball down the sideline to hold serve and go up 4-3.

A questionable line call in the eighth game clearly frustrated Schipanski, who was rattled and eventually handed Bolt free points – and a break of serve – with two consecutive unforced errors.

Schipanski had no answer to Bolt’s mobility around the court as he chased down balls with great ferociousness, keeping every point alive and taking out the first set 6-3.

The two players held serve early in the second until Schipanski sprayed a second serve wide to give Bolt a crucial break point.

But two poor returning efforts from the second seed saw Schipanski breathe a sigh of relief and close the game out, taking a 2-1 lead.

Bolt lifted a gear at 3-3, again showing great desperation by working tirelessly running between the sidelines.

His intensity paid dividends as he broke his opponent, much to the delight of the 18-year-old who roared in celebration and pumped his fists before changing sides 4-3 up.

With a win and a quarterfinals berth in sight, Bolt pushed up the court. Schipanski continued to struggle to contain Bolt’s monster first serve, with the latter eventually coming away with a convincing 6-3 6-4 win.

Bolt said he was delighted with the win and is growing in confidence after some strong performances.

“The first match probably didn’t go to plan, but as the days have gone on I’ve started to pick up my game and I’m starting to play a lot better,” he said.

Bolt admitted his booming first serve is something he capitalises on every match to dictate how the game is played.

“I always like to be on top of the point and control where I’m hitting the ball,” he said.

Bolt will find out who his quarterfinals opponent is later today.