Norman and Daphne have made a grand debut on their first international trip to China. 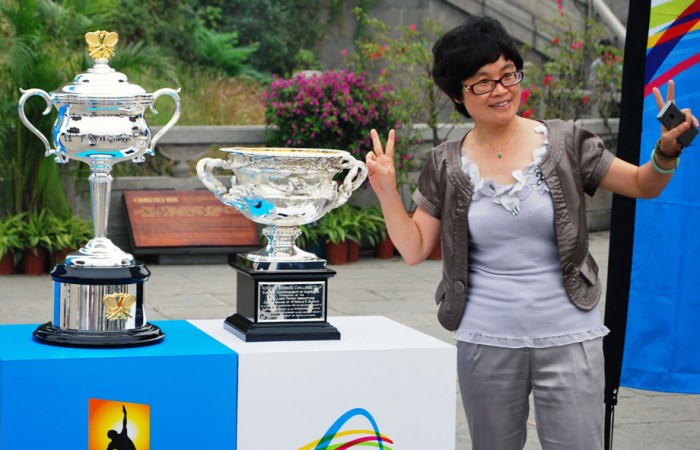 Norman and Daphne have made a grand debut on their first international trip to China.

Flying in via Hong Kong, the silverware made their first public appearance in front of a throng of tennis fans, local dignitaries, Chinese celebrities and curious onlookers at Wuhan Sports University.

Aside from Norman and Daphne’s unveiling, the biggest cheers were heard when Chinese tennis player Sun Tiantian and Chinese Australian pop singer Li Xiaoyan took to the stage for interviews and photos with the trophies.

Xiaoyan later hit up her 428,286 followers on Chinese social media, telling them about her day with the trophies with her posts receiving 11,357 re-tweets and over 2000 comments.

Following the on-stage ceremony, hundreds queued for their photo opportunity with the trophies and the younger brigade took part in an MLC Tennis Hot Shots clinic under the tutelage of coach extraordinaire Alex Jago all the way from Tennis Tasmania.

The Wuhan community’s passion and excitement for tennis could be witnessed through the sheer delight on their faces as they had their brush with Australian Open fame.

It was surprising also to witness their high excitement when meeting the visiting staff from Tennis Australia as photo and even autograph requests were made.

A 20-strong team of local and international staff transported the two trophies and plinths up an innumerable number of steps for a photo opportunity and impromptu public showcase of the trophies in front of the tower.

Tourists and school groups visiting on an excursion were suddenly presented with a once-in-a-lifetime photo opportunity.

Two local schoolchildren were also part of the travelling team up the tower, showing off their skills on an MLC Tennis Hot Shots mini-court playing against coach Jago.

Hosted by Mr Dean Brostek, the dinner was attended by over 70 guests from 40 different business, government and sporting organisations.

A last stop in Wuhan was made at Mr Jin’s tennis-themed restaurant on Thursday with a huge welcoming party on hand to welcome the trophies inside.

The restaurant can seat over 2000 guests across three levels with each room themed to a certain tennis player including Roger Federer, Andy Murray, Serena Williams and even a combined Andre Agassi and Steffi Graf room.

A huge Chinese banquet was served and the local media attended in droves with Wuhan TV news running a six-minute package in its evening bulletin about the trophies’ visit.

Without a doubt, Wuhan showed itself to be more than a worthy choice as the first stop on Norman and Daphne’s overseas travels.

Now safely in Shanghai and with Beijing still ahead, the Australian Open international trophy tour is about to get even bigger.