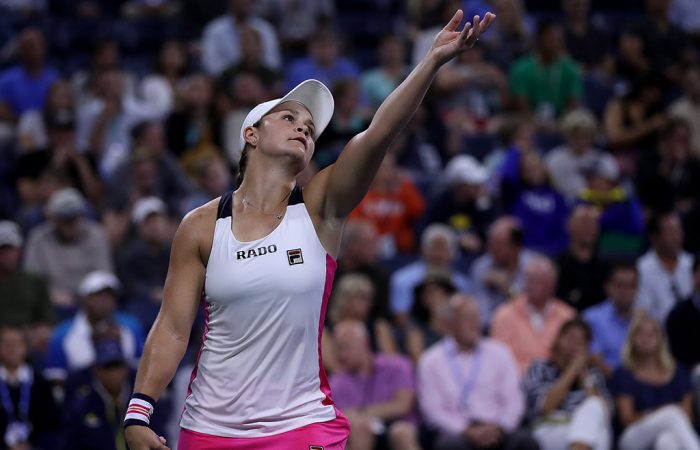 Ash Barty on Friday went down to Aryna Sabalenka in the WTA Wuhan Open semifinals.

The Australian lost 7-5 6-4 to the defending champion, who also stopped Barty by a similar scoreline in last year’s semifinals.

Barty required a medical timeout midway through the second set to treat what appeared to be a calf or Achilles problem.

“Obviously pretty disappointing. I felt like I had to protect it a little bit. It’s important at this time of the year to listen to your body,” Barty said.

“There were certain things I wasn’t able to do. Yeah, just a bit sore and tired and tight and all of those things.

“Kind of felt it quite early on in that first set. Was just trying to hang on a little bit. Progressively got a little bit worse. Just needed to give it a little bit of attention.”

It is unclear how this will affect her prospects at next week’s China Open, where she is the No.1 seed and where she receives a first-round bye.

“I’m sure it’s nothing that is too alarming. I tried to do the best that I could to protect it in a way without letting it affect my tennis too much. Yeah, there will be no worries.”

Barty fought impressively throughout the match, recovering from 3-1 down in the first set and saving two set points — while also earning two break points — in the 12th game as Sabalenka served for the set.

Yet the No.9 seed would not be denied, converting her third set point and breaking serve in the ninth game of the second before closing out the match with a scorching backhand winner down the line.

“I think overall Aryna was the better player today. She was able to control her service games a lot better. I felt at times I was hanging on a little bit. I had to take a lot of risks today to try to manage where I was at,” Barty assessed.

“Probably more so disappointed in the end that physically I wasn’t able to kind of keep up to where I would have liked. I mean, it’s all good. I still was more well and truly in the match than I probably deserved to be.”