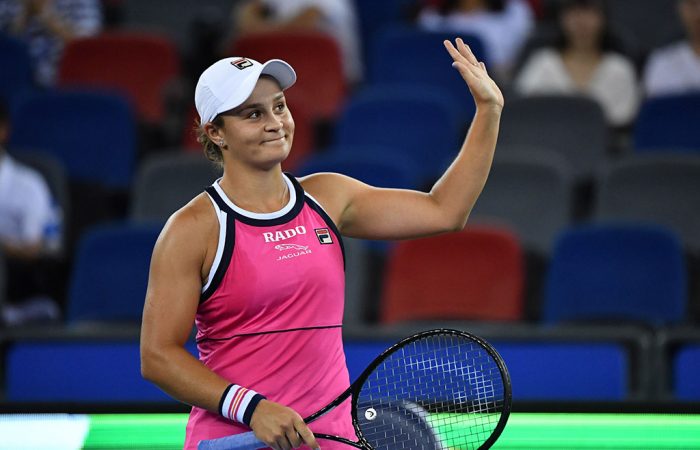 Ash Barty overcame a stubborn Sofia Kenin on Wednesday to reach the quarterfinals at the WTA Wuhan Open.

Avenging her opening-round defeat to the American in Toronto, Barty extended her head-to-head record over Kenin to 4-1 thanks to a 6-3 7-5 victory.

“We’ve played a few times this year already and I think it’s always a very tough challenge. Sofia’s extremely confident at the moment and she’s aggressive off the baseline,” Barty said of last week’s Guangzhou champion.

The Barty Party continues at the @wuhanopentennis 💃

A finalist in Wuhan in 2017 and a semifinalist last year, Barty has now arrived in the last eight at the US$2.82 million event three years running.

She will play either Petra Martic or Veronika Kudermetova for a place in the semifinals.

“If I serve well it’s always a good thing — it’s something I work on all the time, and it’s nice when you can get some free points,” Barty said.

“We’ve been close before (here). We have another opportunity to play another match. This is a beautiful court and it’s really nice to play in front of so many people in this beautiful stadium.

“So it’s exciting to give myself another chance in Wuhan.”

Barty overpowered Kenin in the opening set, closing it out with consecutive forehand winners.

Yet with the first set in hand she indicated to coach Craig Tyzzer that she was dissatisfied with her game.

And it was clear in the second set that she was struggling to attain her highest level.

She broke immediately in the second set, only for Kenin to break straight back. She held break point in the seventh game for a 4-3 lead, but couldn’t take her chance. She was then broken to love in the following game, handing Kenin a 5-3 advantage.

By the time the American arrived at set point in the ninth game, Barty had already committed 18 unforced errors in the second set alone.

But Kenin double faulted on that set point, and suddenly, Barty was reinvigorated.

Sensing her opponent’s nerves, Barty stopped giving the 15th seed cheap errors and more patiently worked points from the back of the court.

After saving a second set point, 3-5 was suddenly 6-5 as Kenin double faulted again to drop serve.

Serving for the match, Barty made no mistake, closing out the game at love with an ace.

The Australian won 15 of the last 17 points of the match.