Boosted by smart scheduling, world No.1 Ash Barty battles into a third Wuhan semifinal and sixth this season. 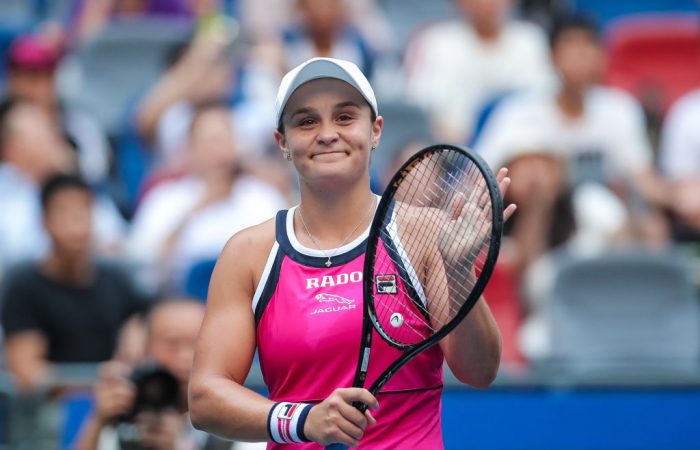 World No.1 Ash Barty says frequent trips home have helped her win trophies on clay, hard and grass courts this year as she vies for the Wuhan Open title.

Ash Barty has credited smart scheduling and frequent trips back home for her mental freshness this late in the season, as the world No.1 reached her sixth semifinal of the year with victory over Petra Martic in Wuhan.

While some Australians struggle with the long stretches of time they spend on the road without being able to fly home due to the long travel distances involved, Barty has made it a point to get the necessary breaks she needs to sustain her level throughout the year.

The strategy has clearly paid off as Barty looked to hit her top form during her quarter-final against Martic, ending the Croatian’s remarkable run of 16 consecutive wins in three-setters with a 7-6(6) 3-6 6-3 victory.

“I go home often throughout the year. I’ve been home pretty much after every kind of trip this year. That’s for me how I mentally refresh, physically refresh as well, make sure that I’m ready to go,” explained Barty, who is enjoying the best season of her career thanks to a maiden Grand Slam title at Roland Garros and her subsequent rise to the top of the rankings.

“Well, she’s a great player. She’s No. 1 right now. It’s going to be interesting to play against her. For sure it’s going to be tough match, but I’m looking forward for it,” Sabalenka said.

Barty is chasing a fourth trophy in 2019, having picked up titles on every surface so far, and has already qualified for the WTA Finals in Shenzhen.

“It was a goal myself and my team set out at the start of this year, was to be more consistent with my level of tennis,” said the 23-year-old Queenslander.

“Having played very well in the slams this year, I think it’s exciting as well that we’ve been able to peak at different times of the year, play some really solid stuff in different areas of the world.

“It’s really nice to have that consistency kind of all across the globe.”