Tsonga shocked, Nadal through at Masters

Jo-Wilfried Tsonga was sent crashing out of the Shanghai Masters on Wednesday by Japan's Kei Nishikori but top seed Rafael Nadal eased through to the third round. 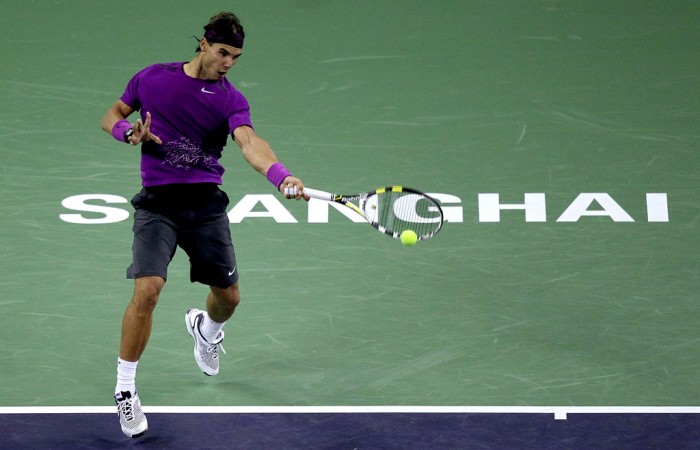 Big-serving Jo-Wilfried Tsonga was sent crashing out of the Shanghai Masters on Wednesday by Japan’s Kei Nishikori but untroubled top seed Rafael Nadal eased through to the third round.

Fourth seed Tsonga lost 7-6 (7-1) 4-6 4-6 after he had appeared to be on his way to a straightforward victory when he stepped up the intensity to seal the first-set tie-break with the loss of just one point.

But world No.47 Nishikori, who needed courtside treatment on his back, broke twice in the second set, levelling the second-round match when the Frenchman netted with a forehand.

Nishikori, who has a poor record against top-10 players, produced two more breaks in the deciding set, taking advantage of an error-strewn performance by Tsonga and sealing the win on his third match point.

The defeat puts a serious dent in the Frenchman’s bid to reach next month’s ATP World Tour Finals. He came into the Shanghai Masters in eighth place in the race to reach the showpiece, featuring the top eight players of the year.

“Of course I’m disappointed because I lost. But today I had a good opponent,” said Tsonga.

“He returned unbelievable. I think nobody breaks me many times like this.”

Referring to his chances of reaching the year-end ATP tournament in London, he said: “At the moment I’m confident. I will take some rest and then I will come back to qualify.”

In his first match of the tournament after a first-round bye given to the top eight seeds, world No.2 Nadal, bidding for his 20th Masters title, beat fellow Spaniard Guillermo Garcia-Lopez 6-3 6-2.

Nadal spoke of his unhappiness about players’ health being put at risk by having to adapt to different balls from week to week.

“It’s unbelievable how the conditions can change from Tokyo to here,” he said.

“The ball is completely different. Something must change because is too dangerous for the shoulders. For us it is a big change.”

Second seed and defending champion Andy Murray had a walkover into the third round after Dmitry Tursunov of Russia withdrew from their match with a right thigh injury.

Earlier, Juan Carlos Ferrero came from a set down in an all-Spanish tie to oust 16th seed Fernando Verdasco 4-6 6-3 6-2, breaking six times during a match lasting a little over two hours.

There was also a win for 12th seed Alexandr Dolgopolov of Ukraine, who overcame Spain’s Albert Ramos 5-7 6-3 6-2.