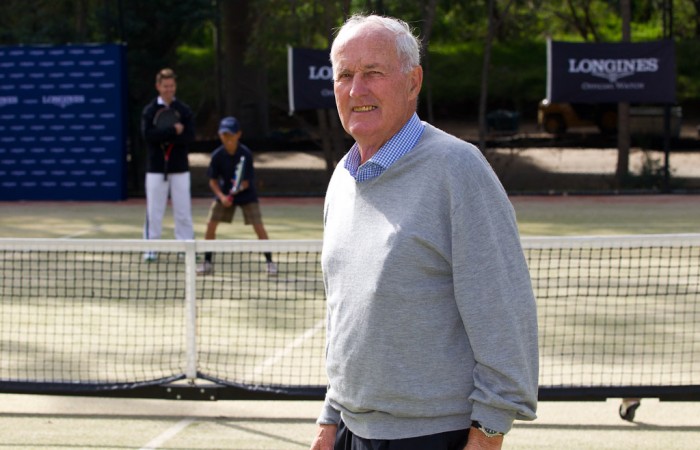 The former three-time Grand Slam® champion will lead a daily tour on Thursday 6 October at 10.30am.

“I am only too happy to meet some people of my vintage and point out some of the highlights of the great Rod Laver Arena, including the Davis Cup Room,” said Fraser, who guided the Australian teams to four Davis Cup titles in 1973, 1977, 1983 and 1986.

Some of the other attractions the seniors will visit and see whilst on their one hour tour with Fraser include the players’ change rooms, Walk of Champions, Australian Open trophies, Margaret Court Arena, the Media Theatrette, Tournament Control and the Signature Wall.

“People on the tour will ask questions and I will hopefully have the answers,” Fraser chuckled.  “Maybe I should take a fact book around with me, but my memory is still good.”

“Weather permitting, I think it would be appropriate for the group to see the busts of former Australian tennis champions in Garden Square,” he said. “They are very impressive and will bring back a lot of memories to the people who are of the same vintage as these players,” Fraser added, who in 2008 he was awarded the ITF’s highest accolade – the Philippe Chatrier award for outstanding achievements in tennis.

The former big server, who also has 11 doubles championships and five mixed doubles titles to his name, enjoys playing an active role in the Victorian Seniors’ Festival, having spoken at Seniors’ Festival events in the past.

Tennis World’s guided tours during Victorian Seniors’ Festival will swing into action at 10.30am daily at a discounted rate of $6.00 (normally $10.00).

“At present, we have about 190 people booked in for the tours across the festival week,” said Andrew Nield of Tennis World.

“Seniors’ tours from 3-7 October are already booked out, but there are still spaces available on 8 and 9 October. Alternatively, seniors may join our regular tours at 11.30am, 1.00pm and 2.30pm during Victorian Seniors’ Festival week at the discounted rate,” Nield added.