It all comes down to this. With the Australians leading the Davis Cup World Group Play-off 2-1 they need to win just one of today's two reverse singles rubbers to move into the World Group next year. 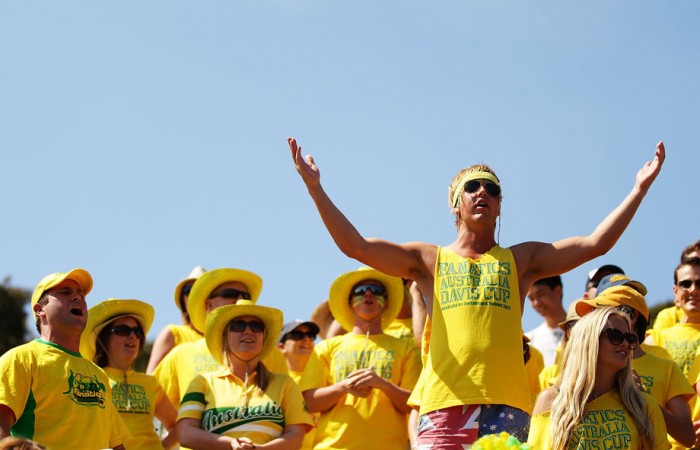 It all comes down to this. With the Australians leading the Davis Cup World Group Play-off 2-1 they need to win just one of today’s two reverse singles rubbers to move into the World Group next year.

But it won’t be easy. Standing in their way is one of the game’s greats in Roger Federer and his top 20 teammate Stanislas Wawrinka.

The Australians’ win in the doubles on Saturday has given the locals a sniff of victory, even Federer admitted that his team was not in a good position going into the final day.

“I’m completely beat up too because we were trying to really win this doubles, that was our big goal and we failed, so we’re disappointed. It’s going to be a tough day tomorrow. We’ll believe, but it’s going to be tough.”

Australian captain Pat Rafter was having none of this.

“We still think this is definitely a 50-50 proposition out there and that’s the way we’re going to approach it.”

“We’re going to get Bernie all fired up and Lleyton will prepare like he’s gotta fight for his life out there.”

So, to today’s matches. First up it’s Bernard Tomic versus Federer. Earlier this year the tennis world was denied seeing the master and the apprentice meet for the first time. Their potential third-round meeting at this year’s US Open was scuttled when Tomic bowed out in the second round to Marin Cilic.

It will be a big moment for the 18-year-old Tomic who said he felt nervous just knowing Federer was watching from the sidelines during his day one win over Wawrinka.

“It’s a great match-up for him,” said Hewitt. “To go out there with very little to lose out there now, [we’re] 2-1 up. He can go out there [with nothing to lose] and I think that’s  when he probably plays his best tennis.”

And he’ll need to bring his best against Federer, who said he is looking forward to taking on the Wimbledon quarterfinalist.

“I’m excited to be playing against him, he’s got an unusual playing style but I hope I can exploit a few errors in his game,” said Federer.

In the fifth and final rubber, Hewitt is scheduled to take on the injured Wawrinka. It’s no secret that the Swiss No.2 has been nursing a leg injury since the US Open.

Following yesterday’s doubles loss, Wawrinka admitted just how much this injury is hampering him.

“I’ll need to see how I feel tomorrow,” Wawrinka told reporters. “After two long matches it’s really tough on me right now with the leg, so I hope I can have a good night of sleep and we’ll see.”

And if Federer defeats Tomic and the fifth rubber is live, the Swiss will need to put their best foot forward, not an injured leg.

The players, along with team captain Severin Luthi, need to decide whether or not an injured world No.19 has a better chance than a fully fit Stephane Bohli (ranked No.218) or Marco Chiudinelli (No.246).

Hewitt, by all reports, is a certain starter. Earlier this week he made it clear that this week’s matches will be his last for 2011, thanks to a foot injury that has dogged him for most of the year.

But rest will have to wait for one more day if his country calls on him to get them over the line once again.

“I’d love nothing more than a live fifth rubber. I can tell you that right now,” said Hewitt.

And if the fifth rubber is live, Hewitt has the full support of his captain, Pat Rafter.

“It’d be great, the best man, our most famous Davis Cup player right here beside us playing the fifth rubber. If it gets to that we’ll be OK.”

Day three of the Davis Cup World Group Play-off will be telecast live on 7TWO today from 11:00 am