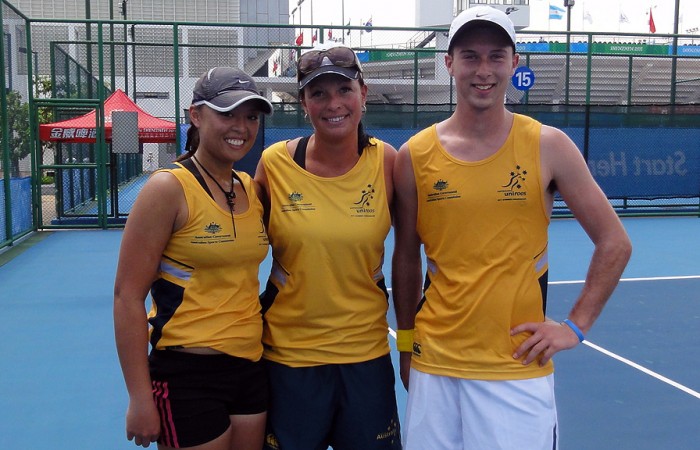 Our Australian tennis team arrived in Shenzhen, China on 9 August to compete in the 26th World University Games. The team consists of two Victorians – Sam Thompson and I – and we also have a team manager, Karen Butler, also from Victoria.

All the athletes who are competing at the Games are staying at the athletes village, which is so big that you need to get a mini-golf cart bus to get around the village. They have everything you need here including a dining hall, which is open 24 hours a day, 50 metre pool, gym, supermarket, bank and post office. There is even a big stage in the middle of the village that has an entertainment act every night.

The tennis event didn’t start until 14 August so we had a training camp over four days to get acclimatised to the weather and humidity. It was raining non-stop for the first couple days so we had to try and get on the indoor courts. The indoor courts had no air circulation or windows so all of the players were complaining it was like training in a sauna. Once the rain cleared, we started to feel the extremely heat and it was making it difficult for us to hold onto our racquets due to the perspiration.

The opening ceremony was on the August 12 at the Gymnasium of Shenzhen Bay Sports Centre. Our flag bearer was Alice Mills, the Olympic swimmer, and it was an honour to be able to walk under the Australian flag alongside her.

The ceremony itself was amazing. All the athletes walked into the stadium per country, just like the Olympics and there were dancers and cheerleaders, the atmosphere was incredible. Especially when Chinese team entered the stadium, there was a large roar to greet them. The occasion was so big that the President of China, Hu Jin Tao attended to officially open the games.

Sam played on the first day and unfortunalty had a tough round against an opponent from Spain. We managed to start our mixed doubles today and we got through in three sets against Namibia. Looking forward to playing more mixed doubles.

So far it has been an amazing experience representing Australia and being able to be mix in with all kinds of athletes from different sports, who have achieved so much.