Guccione, Matosevic and Ebden progress at the ATP Washington Classic. 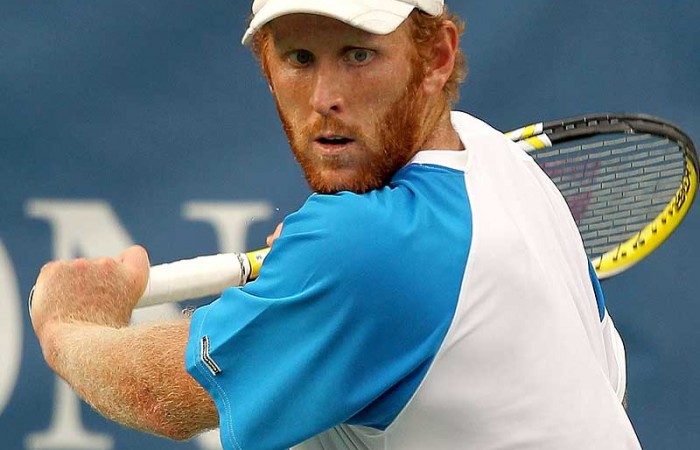 Qualifiers Chris Guccione, Marinko Matosevic and Matthew Ebden provided Australia with a clean sweep of victories in the opening round of the $US1.4 million ($A1.3 million) ATP Washington Classic on Monday.

Big-serving world No.224 Guccione will play American 13th seed Kevin Anderson in the second round after downing Colombian Alejandro Falla 7-6 6-3 in the US Open warm-up event.

World No.140 Ebden set up a clash with ninth seed Nikolay Davydenko after American Rajeev Ram retired after trailing the Aussie 6-1 3-2.

In other matches, American Donald Young reeled off 14 consecutive points in a surge that helped him to a 6-0 6-3 win over New Zealand’s Artem Sitak.

Blake’s second-round opponent will be Argentine David Nalbandian with Kunitsyn to face Jarkko Nieminen of Finland.

Eighth-ranked Mardy Fish was forced to withdraw from the Washington Classic, one day after the American suffered a heel injury in an ATP final loss in Los Angeles.

Fish, who won an ATP event two weeks ago in Atlanta, lost the Los Angeles final 5-7 6-4 6-4 to 84th-ranked Latvian Ernests Gulbis and would have been playing three weeks in a row ahead of Masters events in Canada and Cincinnati.

Controversial American Wayne Odesnik was inserted in the draw as a lucky loser to replace Fish, who would have been the second seed in Washington behind Frenchman Gael Monfils.

Odesnik was banned for two years last May after pleading guilty to importing human growth hormone (HGH) into Australia. He lost all ranking points after reaching a career-high 77th and his ban was backdated to the prior December.

Odesnik, arrested in January last year in Brisbane with eight vials of HGH, pleaded guilty to bringing the banned performance-enhancing substance into Australia but denied taking HGH. He has never tested positive for the drug.

The International Tennis Federation cut Odesnik’s ban to one year after he cooperated with the group’s anti-doping program and last January he began rebuilding his ranking in low-level events to now stand 161st in the world.

Odesnik goes directly to round two where he faces Stepanek.