Gajdosova out of Gastein Ladies

Second-seeded Jarmila Gajdosova of Australia was upset by Johanna Larsson of Sweden 6-4 6-2 in the opening round of the Gastein Ladies on Tuesday. 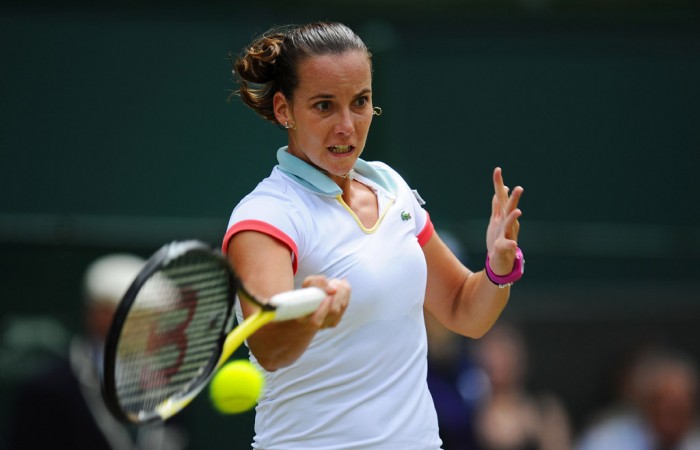 Second-seeded Jarmila Gajdosova of Australia was upset by Johanna Larsson of Sweden 6-4 6-2 in the opening round of the Gastein Ladies on Tuesday.

The 29th-ranked Gajdosova, who comfortably beat Larsson on her way to winning the Hobart title in January, served 10 double faults and was broken six times.

The 16th-ranked German, who won her second WTA title in Stuttgart in April, was the top-seeded player after Wimbledon champion Petra Kvitova pulled out last week.

Goerges dropped the opening set against the 94th-ranked Pous-Tio after double-faulting on set point. She recovered to quickly take the second but lost serve twice in the decider.

No.7-seeded Barbora Zahlavova Strycova of Czech Republic lost to Carla Suarez Navarro of Spain 7-6 (9-7) 6-2, and No.5 Lourdes Dominguez Lino of Spain was beaten by wild card Patricia Mayr-Achleitner of Austria 6-0 7-6 (7-5).

No.3 Lucie Hradecka and No.4 Iveta Benesova went out on Monday, which left No.8 Ksenia Pervak the only seeded player to reach the second round so far. The Russian beat Alize Cornet of France 7-6 (7-3) 6-2.

In a late first-round match, No.6 Simona Halep of Romania will play Austria’s Sybille Bammer on Wednesday.

Also, 2007 finalist Yvonne Meusburger of Austria, Kateryna Bondarenko of Ukraine and Kristina Barrois of Germany advanced to the second round.