Novak Djokovic and Rafael Nadal both extended their win streaks with opening victories at the ATP-WTA Madrid Masters on Wednesday as Roger Federer saved a match point before joining them in the third round. 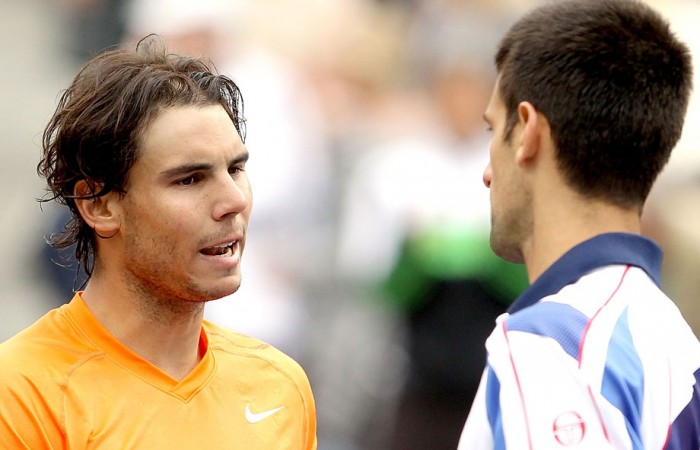 Novak Djokovic and Rafael Nadal both extended their win streaks with opening victories at the ATP-WTA Madrid Masters on Wednesday as Roger Federer saved a match point before joining them in the third round.

Djokovic, who beat South Africa’s Kevin Anderson 6-3 6-4, extended his run of 2011 success to 28-consecutive matches, putting the Serb within striking distance of the record for the all-time best season start in tennis.

The second seed now has a chance to draw level with Ivan Lendl, who went 29 matches without defeat at the start of the 1986 season.

Nadal won a 35th consecutive match on the surface, efficiently dispatching former Australian Open finalist Marcos Baghdatis 6-1 6-3 in just under 90 minutes. Nadal has not lost on clay since 2009 in the French Open fourth round to Robin Soderling.

Third seed Federer defeated Spaniard Feliciano Lopez in a tight affair 7-6(13) 6-7(1) 7-6(7). The Swiss star has won all eight of their encounters.

Djokovic, the world No.2, says he is only interested in replacing Nadal atop the ATP rankings.

“It’s a great honour and flattering to be part of the elite, but it’s not my priority,” said Djokovic.

“I’m only taking it one match at a time and just hoping I can keep winning.”

Djokovic needed one hour and 40 minutes to beat Anderson, winner of his home title at Johannesburg in February and a clay quarterfinalist last week in Estoril.

“Where there is altitude it’s tough to control the ball, there are more mistakes,” said Djokovic, who has won five titles this season.

“It’s crucial to stay really focused for each point. You don’t get that much time on this court and serving well is an advantage.

“It’s a fact that I’m playing the best tennis of my life. I’m definitely happy about it,” he added.

Li secured her win in 58 minutes with five aces and three breaks of serve.

In the third round, Czech 16th seed Petra Kvitova upset second-seeded Russian Vera Zvonareva 6-1 6-4 to earn the first of the quarterfinal spots.

Australia’s Sam Stosur will face Anastasia Pavlyuchenkova in the third round, while Jarmila Gajdosova takes on Czech Lucie Safarova.

In the doubles, Stosur and partner Francesca Schiavone fell to sixth-seeded duo Bethanie Mattek-Sands and Meghann Shaughnessy 6-4 6-2. Meanwhile, Casey Dellacqua and Rennae Stubbs will play Su-Wei Hsieh and Zi Yan in the quarterfinals.