Novak Djokovic beat Blaz Kavcic of Slovenia 6-3 6-2 in the quarterfinals of the Serbia Open on Friday for his 26th consecutive victory in 2011. 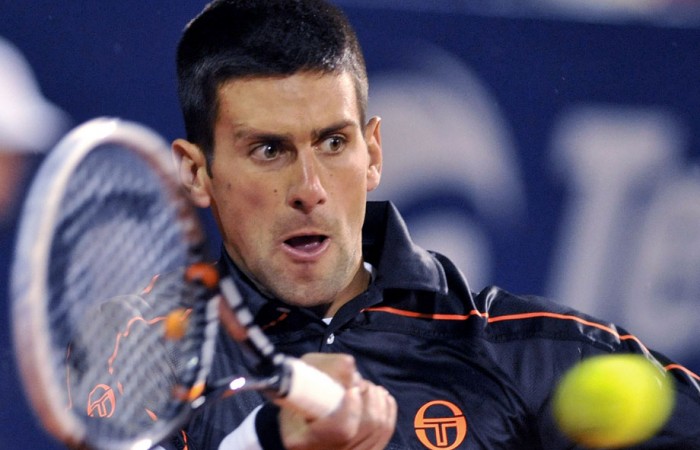 Novak Djokovic beat Blaz Kavcic of Slovenia 6-3 6-2 in the quarterfinals of the Serbia Open on Friday for his 26th consecutive victory in 2011.

With the win, Djokovic registered the best start to an ATP tour season since Ivan Lendl in 1986.

Djokovic has won 63 of 69 sets and four tournament titles in 2011 – including the Australian Open – and has unseated Roger Federer, the last man to beat him, for the world No.2 ranking.

Djokovic did not shine on Friday, but the 85th-ranked Kavcic could not seriously threaten the Serb, who had one break in the first and three in the second set.

Leading 4-1 in the second, Djokovic threatened to quit the match because he said the lines got too slippery as it started raining.

“I don’t want to play, I don’t want to get injured,” Djokovic shouted angrily at a chair umpire, leaving the court and sitting on his bench. The play resumed only after the lines were wiped, and Kavcic then managed his only break of the match.

“There was some pressure, but I’ve learned to deal with it by now,” said Djokovic, whose family helps organise the event.

In the semifinals, Djokovic will play his fellow Serb Janko Tipsarevic, who edged Somdev Devvarman of India 6-3 3-6 6-4.

The seventh-seeded Tipsarevic was broken while leading 5-3 in the third set as he was serving for the match. But Devvarman lost his composure in the next game, and was broken to love.

“Somdev plays with a lot of confidence he gained lately on the tour,” Tipsarevic said. “When I dictated the play, I was winning. When I stuck to the baseline, I was in trouble.”

Lopez converted two of his nine break points against Montanes to reach his first ATP semi-final of the year.

Volandri, who will play his first semi-final in more than two years, dispatched Granollers with 20 winners compared to the Spaniard’s five.

“I’m really happy with this win,” Volandri said. “It’s a good feeling to be in the semis again after so long.”