Novak Djokovic cruised to his 25th consecutive win this season by beating Romanian qualifier Adrian Ungur 6-2 6-3 in his clay court opener in the second round of the Serbia Open on Wednesday. 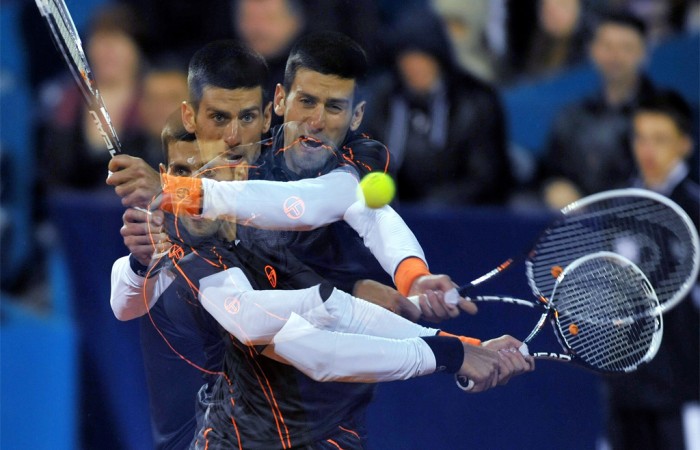 Novak Djokovic cruised to his 25th consecutive win this season by beating Romanian qualifier Adrian Ungur 6-2 6-3 in his clay court opener in the second round of the Serbia Open on Wednesday.

The No.2-ranked Serb is off to the best start to a season since Ivan Lendl swept his first 25 matches in 1986.

He has won 61 of 67 sets and four tournament titles on three continents, including the Australian Open, to take the No.2 ranking from Roger Federer – the last player to beat him.

On Wednesday, Djokovic was broken twice in front of his home crowd but never really looked in trouble against Ungur.

“It’s tough to play on clay after almost a year,” Djokovic said. “It will take a bit to get used to it.”

Earlier Wednesday, Spanish duo Albert Montanes and Feliciano Lopez both advanced to the quarterfinals of the tournament managed by Djokovic’s family.

Montanes won seven straight games starting at 2-2 in the second set, taking a 3-0 lead in the decider before cruising to victory.

Lopez broke for a a 2-1 lead in the second set with a forehand winner after chasing down a drop shot by Gonzalez.

The Chilean, who was playing his first tournament since returning from an eight-month injury layoff because of hip surgery, broke back immediately but couldn’t stop Lopez from converting his third match point in the tiebreaker.

Earlier, Blaz Kavcic of Slovenia also advanced by beating Ricardo Mello from Brazil 7-5 6-3 during another wind-swept day of the Serbia Open. Kavcic is to play Djokovic in the quarterfinals.

“He beat me while we were 14-year-olds, and it’s time for a revenge,” Djokovic said.