Top seeds Isabelle Wallace and Jordan Smith have been crowned the Optus 14s National Claycourt Champions for 2011 in Ipswich on Monday. 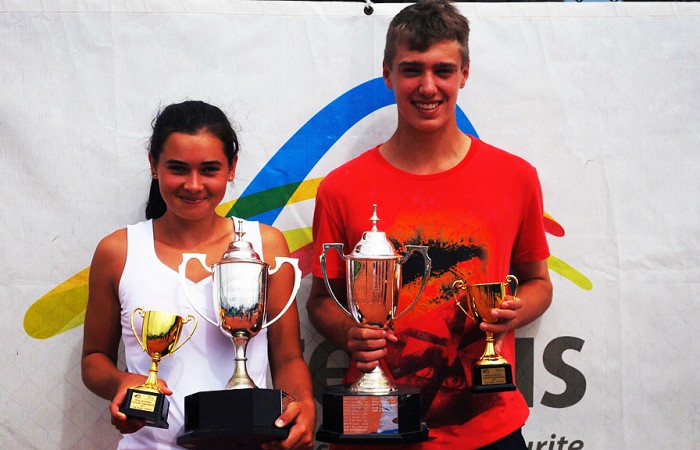 Top seeds Isabelle Wallace (East Bentleigh, Vic) and Jordan Smith (Castle Hill, NSW) have been crowned the Optus 14s National Claycourt Champions for 2011 after they both came from a set down to win their singles finals at the George Alder Tennis Centre in Ipswich today.

“That was my goal this year, to win a 14s Nationals [tournament] and to keep going in the 16s and ITFs,” said Wallace, who is currently ranked 114 in the Australian Rankings

Andrinopoulos came out firing and quickly jumped to a 4-2 lead and eventually hung on to take the opening set. Last December’s Optus 14s Australian Championships finalist was also a break of serve up in both the second and third sets, before Wallace wrestled back control and closed out a thrilling match.

“I felt disappointed at the end of the first set but then I got back on track – Annabelle played really well in the first set and throughout the whole match,” Wallace said.

“Lawrence played very well today and got off to a great start leading 5-0, but I managed to start better in the second and third sets which got me over the line,” said Smith, who had previously won a 12/u national championship at the 2009 Optus 12s Winter Nationals.

“I kept positive and kept on going with my game plan. It was a goal to win a 14s Nationals and now it will be to do well in the 16s and get a few ITF points as well as head overseas, which will be a great experience.”