Holders Italy on the brink of defeat

Defending champions Italy stood on the verge of elimination from the Fed Cup on Saturday after Russia, inspired by Svetlana Kuznetsova, moved into a comfortable 2-0 lead in their semi-final. 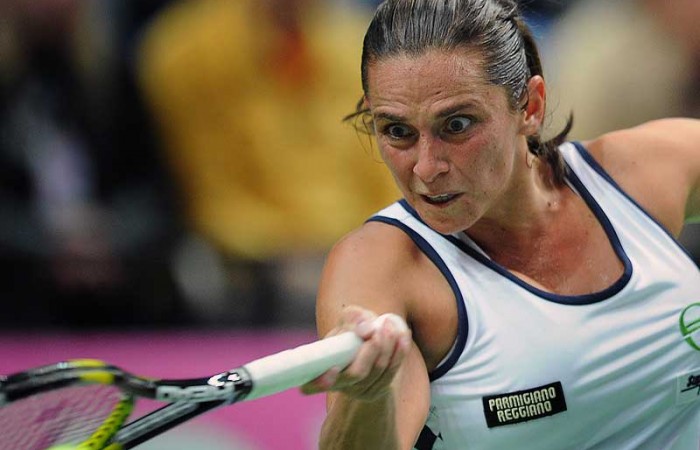 Defending champions Italy stood on the verge of elimination from the Fed Cup on Saturday after Russia, inspired by Svetlana Kuznetsova, moved into a comfortable 2-0 lead in their semi-final.

Earlier, world No.3 Vera Zvonareva blasted Sara Errani 6-0 6-2 to give the Russians first blood with her fourth win over Errani in as many meetings in just 56 minutes at Moscow’s Megasport indoor arena.

“It was much harder to win today than it may appear looking from outside,” Zvonareva said. “I had to battle for every single point.”

“I’m happy with my performance,” added last year’s Wimbledon and US Open runner-up.

Russia will now hope to complete the job ahead of time with Sunday seeing the doubles and also the reverse singles.

“We have to acknowledge that the Russians played very well today. They have great players,” said Italian captain Corrado Barazzutti, whose team have brought home three titles in the past five years.

“Tomorrow is another day and if the Russians win, then we have to congratulate them but we will have to see what’s up tomorrow because anything can happen.”

The other semi-final was finely poised, with Belgium and the Czech Republic locked at 1-1.

Petra Kvitova gave the visiting Czechs a 1-0 lead after defeating Kirsten Flipkens 6-2 7-6 (7-4), but Yanina Wickmayer levelled the encounter with a 6-4 6-4 success over Barbora Zahlavova-Strycova in Charleroi.

Kvitova, ranked No.18 in the world, had to see off stiff resistance in the second set before outlasting 106th-ranked Flipkens.

The Belgians are up against it this season as they try to overcome the recent retirement of Justine Henin, while world No.2 Kim Clijsters is currently injured.

“If you look at the WTA standings, the Czechs are in a better position than we are, but our motivation is such that we really can make the final,” insisted Belgian skipper Sabine Appelmans.

“Yanina and Kirsten are perfectly prepared.”

In the World Group I play-offs, 17-time champions the United States, beaten by the Italians in both of the last two finals, were facing a huge battle to come back against Germany after Andrea Petkovic and Julia Goerges gave the hosts a 2-0 lead in Stuttgart with straight sets wins.

In the same group, Spain and France were locked at 1-1.