Alex de Minaur leads the charge as Australia claims a 2-1 victory over Hungary at the Davis Cup Finals in Italy. 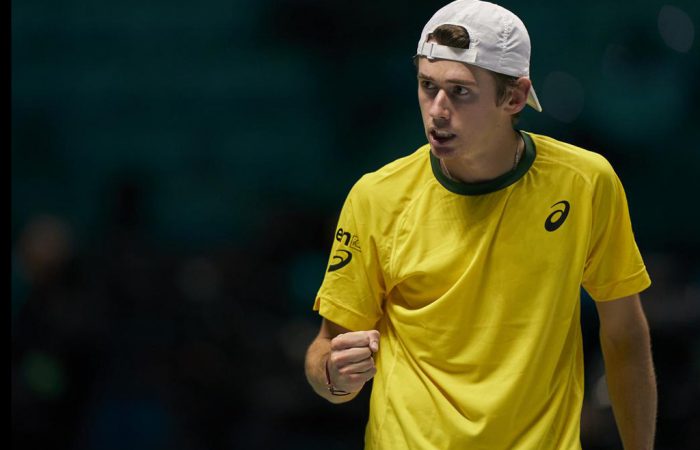 With Alex Bolt and John Peers following with a victory in the doubles, Australia completed the round-robin tie with a 2-1 victory over Hungary.

While the Australian team remains on the brink of elimination from the competition following a 0-3 loss to Croatia on Friday, there were many positives to take from their latest encounter.

For De Minaur, the three-set win over Fucsovics was the perfect ways to end a challenging second half of the season.

“(A) nice little confi booster. Time to build from that,” said the 22-year-old, who required more than three hours to secure victory.

“After the first day of just being around these boys, I mean, my whole morale just changed. These boys brought me up. I enjoyed myself. We were training hard.

“This is exactly what I needed to finish the year well. Definitely thrived off this experience.”

The opening set saw Millman broken in the first game before the Australian found his rhythm and broke Piros in three consecutive games to end the set 6-4.

Breaks remained a feature throughout this contest, with both players dropping serve a combined 12 times.

The second set saw players exchange breaks on the way to 2-2, and it remained on serve until the ninth game of the set, when Millman slumped to 0-40 on the back of a couple of unforced errors.

Piros converted the third of his break chances and had to survive a break point of his own before serving out the set 6-4.

Again, the third set opened with three straight breaks of serve before the Hungarian found his rhythm and closed out the contest 6-3 in the third.

It was a high-pressure clash riddled with errors (79 unforced in total), but Piros would strike 28 winners to nine and win 47 per cent of points on return in one of the biggest victories of his career.

De Minaur shifted momentum with his fighting win over Fucsovics.

The Australian had lost a tight encounter with Marin Cilic on Friday before backing up in the doubles, so his effort to outlast Fucsovics was full of merit.

De Minaur was up a break twice in the opening set before eventually claiming it 7-5 in 68 minutes.

The Hungarian world No.40 found his range early in the second set and raced to a 3-0 lead before breaking De Minaur again to claim the second 6-2.

The deciding set saw De Minaur save break points at 3-3, before a couple of terrific forehand winners landed him a crucial break to lead 6-5.

Fucsovics would save a match point, break serve and force the third to a tie break where De Minaur would win five of the first six points to take a stranglehold on the contest.

He secured the tiebreak 7-2 and claim Australia’s first victory of the Davis Cup finals.

The Hungarian’s 46 unforced errors proved costly, with 20 of them coming in the third set as he scrambled to stay in the match.

With the tie now at 1-1, Bolt receive the call-up to partner with Peers for the deciding doubles clash.

Bolt, who was a late replacement for Jordan Thompson in the team, played a crucial role alongside his more experienced partner in guiding Australia to a three-set win over Zsombos and Fabian Marozsan.

The pair took the opening set 6-3, before dropping the second after a marathon tiebreak went the way of the Hungarians 13-11.

The third set saw the Australian’s break serve twice on the way to claiming it 6-3.

“All three matches were extremely tough,” said Australian Davis Cup team captain Lleyton Hewitt, who was particularly proud of the team’s positive attitude after the opening loss to Croatia.

“We had to try and put that behind us,” said Hewitt. “We knew we had an opportunity today to go out and play for Australia again.

“They played with plenty of pride out there. That’s what it’s all about, representing your country.

“I can’t ask any more than my guys giving 100 per cent every time they step on the court. They’ve done that in both of the ties that we played.”

The top-ranked team from each of the six groups progresses to the quarterfinals, as well as the two best second-ranked teams.