Australia and Ukraine are level at one rubber each after the first day of their Fed Cup World Group play-off. 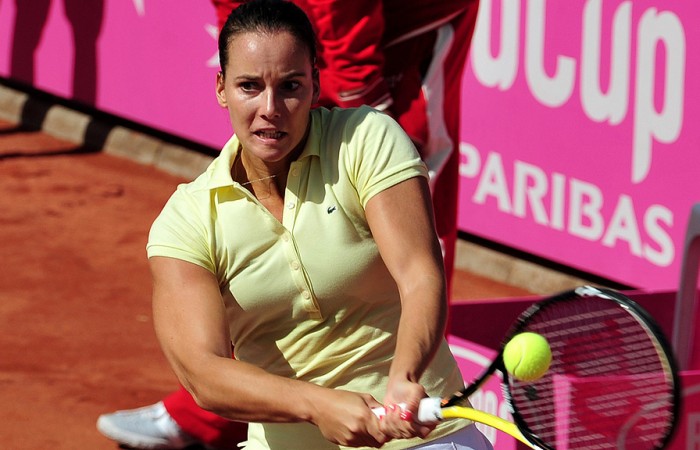 Australia and Ukraine are tied one apiece with mixed results on day one of the Fed Cup by BNP Paribas World Group Play-off against Ukraine.

Jarmila Groth (No.30) opened play at the Glen Iris Valley Recreation Club with a 6-1 6-1 win over Ukraine’s No.2 Olga Savchuk.

Australia’s No.1 player in the tie, took 48 minutes to overpower the Ukrainian world No.144 and said post match it was a solid performance.

“I had a game plan that I had to take on the court and I managed to do that without a lot of errors,” Groth said.

“The tennis court is a very happy place for me, especially if I play tournaments it’s very exciting for me, something like Fed Cup brings out the best in me on the court as well.

“Overall in general I made a very solid performance with not many errors. Very solid and what was needed.”

On tomorrow match Groth hopes to repeat the performance.

“This is my first match on clay since last year,” Groth said.

“I will try to do what I did today, playing the whole week pretty well, hitting the ball clean, hopefully this match is going to help me today and I can play even better tomorrow if it’s possible. “

Savchuk said that it was a tough match.

“It was really fast, less than an hour probably, but I had a bad start and I was very nervous. Jarka, she played in the beginning ok and then felt more confident and in the end it was really tough.”

Tsurenko, who has been in Australia for the last few weeks preparing for the tie on the Australian Pro Tour Events in Ipswich and Bundaberg was happy with her game.

“For me it was a good match. I think maybe one of the best matches for this year, I did everything to save the score, win this match and help my team,” Tsurenko said.

“Last time I lost two matches [in Fed Cup] so it’s a good win for me.

“For me the two tournaments in Australia are good.  When I came to Australia I felt better, I don’t know why, maybe Australia has good conditions for me.”

Rodionova said “I think a lot of things today didn’t really work. I didn’t really feel good on the court, towards the end I finally got stopped making unforced errors felt like I was getting into the match.

On tomorrow the Australian said “I’m playing Olga, we played against each other a few weeks ago on hard court.  I’ll do everything I can do to get ready for tomorrow, forget this loss as quick as possible and hopefully I can fight hard tomorrow.”

The reverse singles will take place on Sunday with Groth to play Tsurenko followed by Rodionova against Savchuk.

Local Glen Waverley girl Sally Peers (145) will join Sophie Ferguson (129) as the doubles pairing who meet Yuliya Beygelzimer (192) and Viktoriya Kutuzova. This will be the last match to be played on Sunday.