Serbia's second-seeded Novak Djokovic rolled into the final of the ATP's Miami Masters 1000 on Friday with a 6-3 6-1 victory over American Mardy Fish. 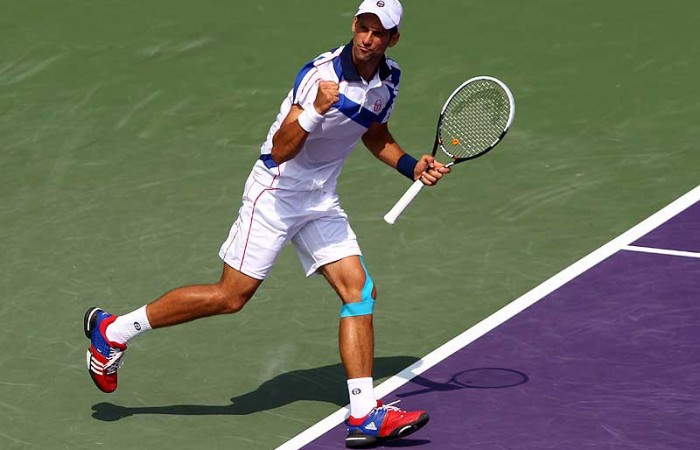 Novak Djokovic’s remarkable run continued on Friday as he steamed into the final of the ATP’s Miami Masters with a 6-3 6-1 victory over Mardy Fish.

Djokovic stretched his 2011 winning streak to 23 straight matches and will have a chance to add the Miami crown to the Australian Open, Dubai and Indian Wells Masters titles captured already this year.

The 23-year-old Serbian, ranked second in the world and seeded second here behind Rafael Nadal, will face either Nadal or third-seeded Swiss Roger Federer in Sunday’s final.

In 30 years, only two players have made a better start to a season: American John McEnroe with 39 victories in 1984 and former Czechoslovakian Ivan Lendl with 25 in 1986.

Fish, who will overtake Andy Roddick as the top-ranked American next week, had Djokovic on the defensive early, but couldn’t convert two break points.

Then came a rain delay of nearly an hour, time that Djokovic used to regroup.

“I told Mardy at the end I got saved by the rain,” Djokovic said. “It really seemed like that. After I went back to the locker room I had 45 minutes to get it together and I felt much better after I came back to the court.”

They resumed with the set level at 2-2, Djokovic serving. He saved a break point, then held with an ace.

The real turning point came at 5-3, as Djokovic served for the set. Fish gave himself a double break point, but couldn’t to capitalise on either, surrendering the set with a backhand into the net.

Djokovic opened the second set by breaking the American, and cruised home, wrapping it up with a forehand winner.

In all, Djokovic saved six break points and has yet to be broken in 40 service games here.

Djokovic said he would watch the second semi-final between Nadal and Federer from his hotel room.

“Who wouldn’t watch?” he said.

The two giants have met 20 times since their last meeting in Miami with Nadal winning 13 of those, including a dozen finals. In their 22 career meetings, just three have been in the semis of a tournament.

“For me, it’s like (a) really special thing when we play each other,” Nadal said.

The spotlight was all for the men on Friday in this $US9 million ($A8.74 million) men’s and women’s tournament, with Maria Sharapova and Victoria Azarenka already booked for Saturday’s women’s final.