Novak Djokovic has overtaken Roger Federer as the world No.2 in the latest ATP rankings released on Monday as players head to Miami for this week's event. 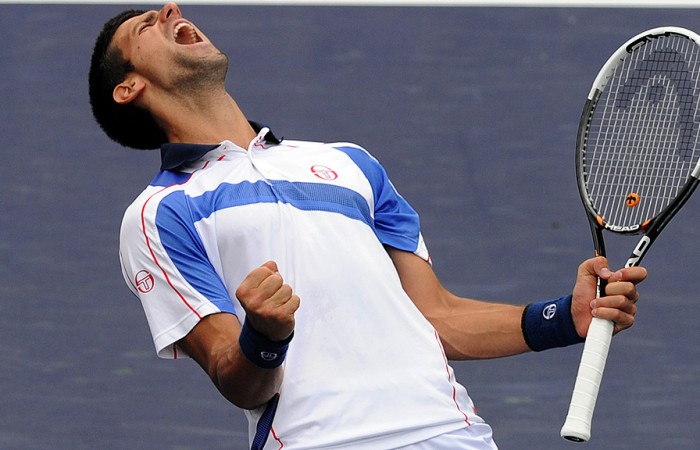 Novak Djokovic, whose 18-0 start this year is the best by any man since Ivan Lendl’s 25-0 run in 1986, brings his unstoppable form to Miami for a ATP and WTA hardcourt event that starts Tuesday.

The 23-year-old Serbian world No.2 dispatched top-ranked Rafael Nadal 4-6 6-3 6-2 at the Indian Wells final after having ousted Roger Federer in the semifinals to move above the Swiss legend in the rankings.

“I’ve played the best tennis of my life in the last three months,” Djokovic said.

“I’m playing with a lot of confidence. I’m feeling the ball well on the court.

“I want to keep on going and keep on playing good tennis.”

If he does, is anybody else ready to derail the Djokovic juggernaut?

“I don’t think anybody is unbeatable,” Djokovic said.

Djokovic has not lost since falling to Federer in last year’s ATP World Finals semi-final in London.

And his win streak does not include two triumphs to help Serbia win last year’s Davis Cup or three round-robin wins in Perth at the Hopman Cup.

Federer is 18-3 this season with all three losses coming to Djokovic.

“It’s normal that in your career you go through better and worse spells. It’s just important to keep it at the high level,” Federer said.

When it comes to finishing the year atop the rankings, even Nadal agrees, “Djokovic is in the best position” but warns, “We will see what is going on in the clay season.”

The clay-court campaign that follows Miami and peaks at the French Open is not a worry for Djokovic, a two-time Roland Garros semifinalist.

“I believe I can play well on that surface and I have proven that in the past couple of years,” he said.

American Andy Roddick, ranked eighth, is the defending champion at Miami while Djokovic won there in 2007.

Federer won the tournament in 2005 and 2006 while Nadal has never captured the Miami title.

Women’s world No.1 Caroline Wozniacki of Denmark is the Miami favourite after defeating France’s Marion Bartoli 6-1 2-6 6-3 on Sunday for her 14th career WTA crown.

But second-ranked Kim Clijsters, the reigning US Open champion from Belgium, is the defending Miami champion, having beaten Venus Williams in last year’s final.

Clijsters also won the Miami crown in 2005 but her fitness is in question as she pulled out of her fourth round match at Indian Wells last week with shoulder problems.

But ninth-ranked Williams, a three-time Miami champion, will miss this year’s event with an abdominal injury.

And her sister Serena Williams, a five-time winner at Miami, is still recovering from surgery earlier this month for a blood clot in her lungs.