Update 5:55 pm. Fed Cup debutante Jarmila Groth has given Australia a perfect start to its first Fed Cup by BNP Paribas World Group tie against Italy, defeating world No.4 Francesca Schiavone 6-7(4) 6-3 6-3.<!--more--> Open proceedings at the Domain Tennis Centre, Groth, had a few chances to break Italy’s No.1 in the first set before Schiavone… 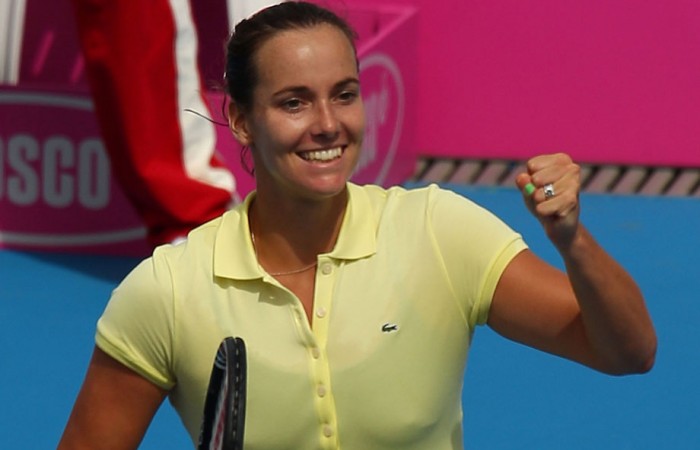 Open proceedings at the Domain Tennis Centre, Groth, had a few chances to break Italy’s No.1 in the first set before Schiavone took the set in a tiebreak.

The world No.4 then went on to take an early break in the second  before the Australian world No.31 fought back to break her more experienced opponent twice to take the second set 6-3 and send the match to a deciding third set.

Early breaks for Groth in the third gave the Australian a 5-3 lead before Schiavone saved three match points before rain interrupted play.

After a 13-minute delay, the players returned to the court and Groth won the third set, breaking Schiavone to take the match.

“It is my first singles in Fed Cup so it is very important, very exciting and to beat someone No.4 in the world is amazing. It is one of the great wins for me and I could not ask for a better start than I already have. I am really happy and excited. Proud of what I have achieved and I am very glad I could help Sam [Stosur] for a good start for the team,” Groth said.

On her performance in the match the Australian said “I think even in the first set that I lost I still felt I was creating my own chances and I didn’t feel I was being out played or beaten.”

“Dave [Taylor] was very supportive and kept telling me all the time to believe in myself. You have a very good return so keep believing and pressuring her.

“I wanted to get that first point for Australia. It means a lot for me to do so and to have such a start.

“Our team is a really great team and in-between all of us they are all very talented and great girls.

On court now is world No.5 Sam Stosur versus Flavia Pennetta in the second of today’s two singles rubbers in Hobart.

Pennetta currently holds a 3-0 advantage over Stosur in their head-to-head meetings.

Sunday will see the replay of the 2010 French Open final when world No.5 Stosur and No.4 Schiavone take to the court followed by the second reverse singles rubber and the doubles.

Rodionova (No.64) and Rennae Stubbs (No.11 in doubles) were named as the doubles pairing against Roberta Vinci (No.38) and Sara Errani (No.44).

Coverage will begin at 1 pm live on Fox Sports 3 on Channel 503 – to view this, push the red button on your remote control.