Third round singles action in the boys' and girls' junior championships continued today as almost all seeded players won through to the quarterfinals.<!--more--> First up in the boys' draw was top seeded Czech Jiri Vesely, who accounted for last year's Australian finalist Sean Berman 6-4 6-1. From the outset, before a strongly… 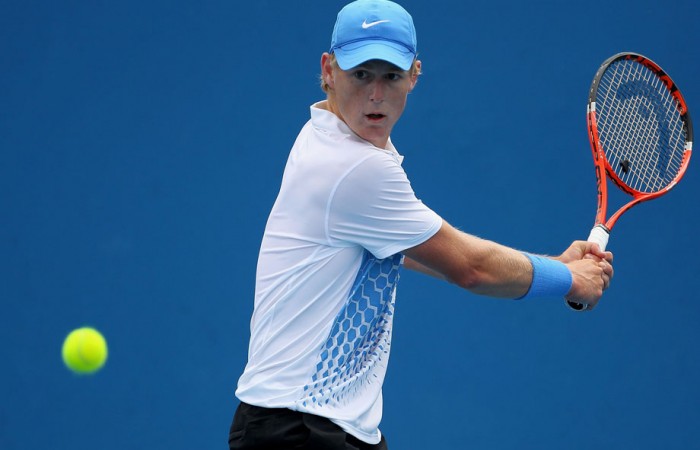 Third round singles action in the boys’ and girls’ junior championships continued today as almost all seeded players won through to the quarterfinals.

First up in the boys’ draw was top seeded Czech Jiri Vesely, who accounted for last year’s Australian finalist Sean Berman 6-4 6-1. From the outset, before a strongly partisan crowd, Vesely was in his element. He raced to a 4-1 lead, smoothly moving Berman around with his deceptive lefty strokes.

However, the fight in Sean Berman must never be discounted, as Vesely found out when the Aussie reeled the set back to 4-3. Nevertheless, the top seed kept his cool, and only needed one break to close out the set 6-4. In the second, it was all Vesely. The tall lefty pounced on his more erratic opponent to take an early lead, and then close out the match with relative ease.

Similarly, Melburnian Andrew Whittington was sent packing by Jeson Patrombon of the Philippines 6-4 3-6 6-0. After losing the first set, Whittington clawed his way back into the match in the second, winning the set with only one break of serve. But in the third, he was simply overwhelmed by the eighth seed, failing to win a single game.

The humble Patrombon was pleased with his form at this stage of the tournament.

“I played well, you know just, want to play my game and believe in myself to beat the other guy, Whittington and it was a good match for me. I think my game is at a good level, it’s getting up. ”

Patrombon next faces the fourth seed from Great Britain George Morgan, who won the match of the day when he defeated Mate Delic of Croatia 6-4 6-7(4) 10-8. Late in the third, Delic went up a break for a chance to serve out the set but was denied the victory courtesy of a spirited comeback from Morgan. Weathering the Croatian storm, Morgan hung tough and eventually closed out the match 10-8 in the third.

Less fortunate was 15-year-old Aussie Nick Kyrgios, who fell to unseeded American Mac Styslinger 6-3 6-4. Styslinger played an excellent match according to his own standards, and was ecstatic with the victory.

“I played real well, didn’t lose my serve once so that’s a big thing for me. I played my best match today and I’ve played my better matches progressively in the tournament.”

More impressive was unseeded Aussie Luke Saville, who defeated 13th seed Serbian Nikola Milojevic 4-6 6-3 8-6. Saville has been in great form all tournament, taking out the second seed and playing with increasing conviction. His match today attests to his confidence, which was most evident in the tightest moments.

In girls action, second seed An-Sophie Mestach led the charge into the quarterfinals, besting Slovenian 16th seed Nastja Kolar 6-1 6-2. The Belgian was in ominous form throughout the match, barely allowing her opponent into the match and capitalising on every opportunity.

However, following the match Mestach maintained that she certainly didn’t expect a routine win.

“No I didn’t expect it to be so easy. Yeah, I played a very good match and the other girl wasn’t playing very well today I think. I’m pleased with my level today. ”

In other girls action, American teen sensation Lauren Davis was bundled out of the tournament 6-0 6-3 by Canadian Eugenie Bouchard. Bouchard next faces Slovakian Anna Schmiedlova, who defeated seventh seed Yulia Putinseva of Russia 6-2 4-6 6-3.

In addition, bubbly Russian fourth seed Irena Khromacheva won through to the quarters after a hard-fought victory over Ilona Kremen 6-2 3-6 6-3.

Happy with her fighting qualities more than her tennis, Khromacheva was content with her win.

“It was not my best tennis today but I’m happy that I won, and I still have power to play tomorrow. First set was good for me I was playing aggressive, but in the second set I began to go down and she was playing better, and in the third set it was not as good as the first set, but I got up in the end.”