Updated: Teenage Australian Olivia Rogowska candidly admitted she was undone by nerves after crashing out in the first round of her home grand slam tournament for the third straight year. 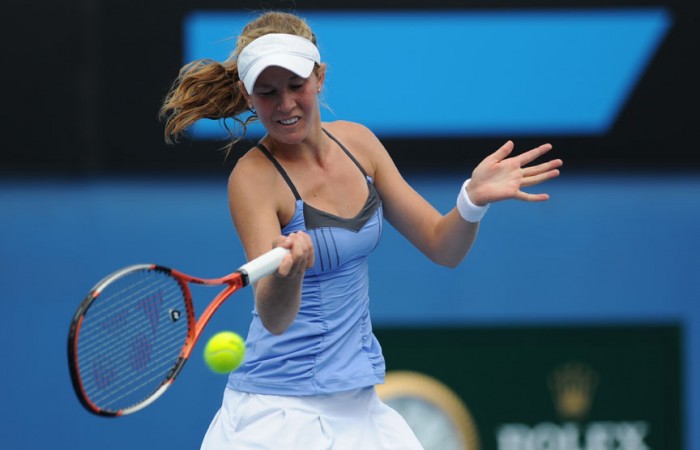 Teenage Australian Olivia Rogowska candidly admitted she was undone by nerves after crashing out in the first round of her home grand slam tournament for the third straight year.

After earning her spot in the Australian Open by beating Jelena Dokic in the final of last month’s wildcard playoff, expectations were understandably high.

And they got even higher when Rogowska was handed what looked like a very winnable first-round encounter against world No.108 Evgeniya Rodina of Russia.

But despite the support of a raucous home crowd, the 19-year-old Victorian struggled to a 6-3 6-1 defeat.

“Nerves played a big part and when I went out there the butterflies really got a hold of me,” said Rogowska.

“I didn’t feel like I was swinging too freely.

“But she played really solid and really well.

“I don’t really play girls at that level very often so it was something very new to me.”

In truth it wasn’t a completely novel experience for Rogowska, who has twice gone toe-to-toe with much higher ranked opponents at majors.

She beat top-50 player Maria Kirilenko in the opening round of the 2009 French Open and pushed another Russian, the top-seeded Dinara Safina, to the brink of defeat at the US Open later in the year.

On both of those occasions the unheralded Rogowska had nothing to lose.

Not so on Monday against Rodina.

“It was a good opportunity, obviously I could have gotten a tougher player so really I thought that expectation really got to me and it’s a big disappointment,” said Rogowska.

” … But you can never have too many of those (grand slam matches).

“Hopefully next time I’ll know what to do, how to play against a girl who hits it so hard, so consistently.

“She makes hardly any mistakes, she made half the unforced errors that I did.”