Groth into final at Hobart

Australia's Jarmila Groth reached the final of the Hobart International with a 6-3 6-2 win over Klara Zakopalova on Friday night. 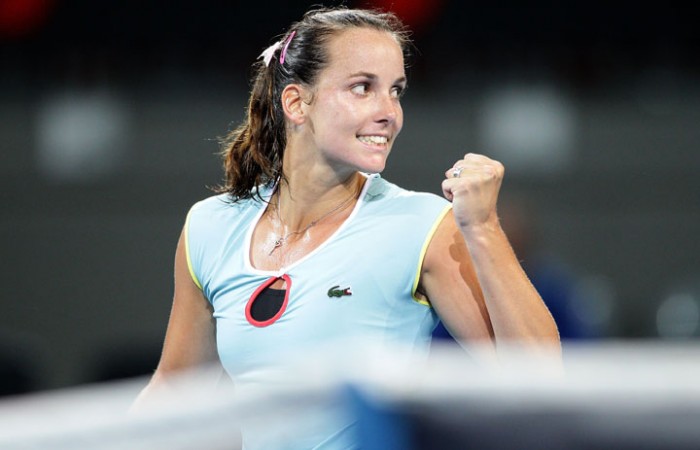 Australia’s Jarmila Groth reached the final of the Hobart International with a 6-3 6-2 win over Klara Zakopalova on Friday night.

The Slovakian-born Groth, who reached the fourth round at the French Open and Wimbledon last year, was too good for her Czech doubles partner, taking out the match in just over an hour.

Zakopalova had been in impressive touch, blasting tournament top seed Marion Bartoli off the court in the quarter-finals on Thursday night.

Bartoli said after the game that Zakopalova could be ranked in the top five based on her performance.

But Groth, who upstaged Australia’s top-ranked player Sam Stosur at the Brisbane International last week, held her nerve early and ran away with the match in the second set.

Groth said she finally had the fitness and preparation to have a good Australian Open campaign – which kicks off with a tough match against 17th seed Yanina Wickmayer.

“I was trying to play well at home (in previous years), but unfortunately I was always coming back from injuries,” she said.

“I’d felt this year I’d had a good preparation and I was feeling confident.

“I think I’ve been playing well for the past two weeks, hopefully it can last another two weeks.”

Groth said it wasn’t easy playing against someone she knew so well.

“She’s my doubles partner, she’s my best friend,” she said.

“It’s hard not to show emotions when you play, you try not to give the fist pumps. I’m sure she forgives me.”

The two were paired up again less than half an hour later for their second round doubles match against Natalie Grandin and Vladimira Uhlirova.

Groth’s opponent in Saturday’s final will be the flamboyant American Bethanie Mattek-Sands, who defeated China’s Peng Shuai 4-6 6-1 6-1 in a hard-fought semi-final.

Mattek-Sands has never won a WTA title, but is fresh from winning the Hopman Cup in Perth last week with compatriot John Isner.