Teenage star Bernard Tomic earned a wildcard into next week's Australian Open with his hot run at the Sydney International but Tennis Australia says he would've missed out if he flopped. 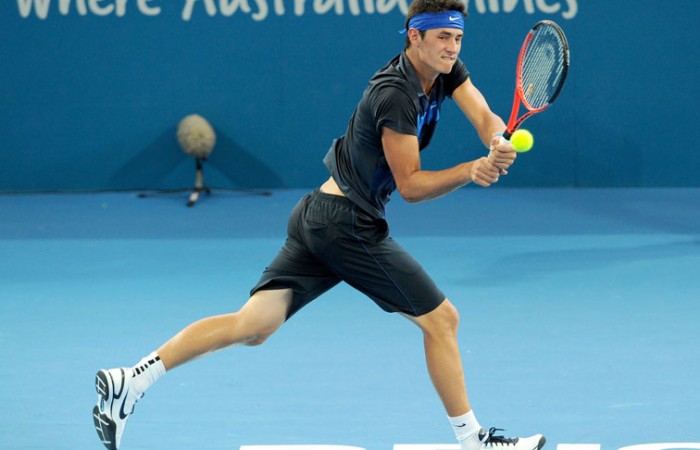 Teenage star Bernard Tomic earned a wildcard into next week’s Australian Open with his hot run at the Sydney International but Tennis Australia says he would’ve missed out if he flopped.

Tomic, a former Australian Open junior champion, clinched his wildcard with three impressive qualifying wins over top-100 rivals in Sydney in the past week, while Ball achieved some solid results on tour last year, including victory in a Challenger event in the US and qualifying for Wimbledon.

“We wanted to see players achieve some results, and Carsten has certainly done that throughout the (past) year.”

Tomic withdrew from last last month’s Australian Open wildcard playoff in Melbourne citing illness, only to upset TA officials by practising the next day in Brisbane, where he proceeded to bomb out in the first round last week.

But the 18-year-old’s form in Sydney was too good to ignore.

“Bernard is a talent but cannot be rewarded with a wildcard on that alone, nor should he ever expect that,” Woodbridge said.

“He has not had much tennis and he missed the AO playoff, so the pressure was on him to perform, particularly after he did not play well in Brisbane.

“He had not done enough. He needed to produce something in Sydney and he has done that with three good wins. His tennis has now earned this wildcard.”

Davis Cup captain Pat Rafter said “in making these decisions, we are also looking at creating a culture that will help us build a strong Davis Cup team”.

“I want to see a real work ethic, attitude and sense of camaraderie that reflects our proud tennis history,” Rafter said.

“That’s always stood out as being a point of difference with the Aussie players.”

Nineteen year-old Peers enjoyed a breakthrough year in 2010, qualifying and winning through to the second round at the US Open, where she made a memorable centre court debut against Kim Clijsters.

Ferguson reached a career-high ranking of world No.119 in June after an impressive run at the French Open, qualifying for the main draw and winning in the first round before falling to No.17 seed and eventual champion Francesca Schiavone.