Lendl holds court with a smile 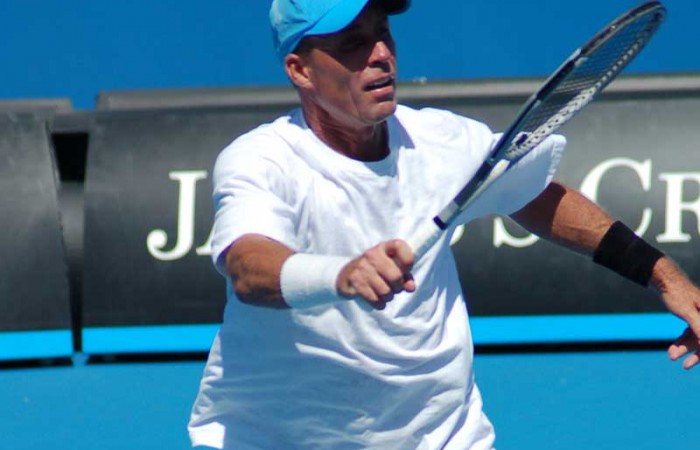 Yes, Lendl – the tennis great who held court years ago without a funny bone.

Robotic and emotionless, sure. Talented, undoubtedly. But funny?

“If somebody wants to compare me now to 25 years ago, well, good luck to them,” Lendl said in Adelaide on Monday.

“I’m not worried about that.”

Lendl, now aged 50, is back playing tennis in public.

But he’s a distinctly different figure compared to the player who ruled the world with a dour disposition.

“I do enjoy the tennis,” Lendl said.

“I enjoyed actually tennis even more than on the tour when playing at home.

“I really enjoyed playing with tour guys at home, where I didn’t have to travel and had a good practice – that was a lot of fun, I enjoyed it.”

But the professional tour itself?

“I did not enjoy the travel,” he said.

“I loved playing, I loved competing, but I hated the travel – other than one trip and that was to come here, to Australia.

“I have a lot of friends here, I enjoyed coming here, we came many times in early December and spent Christmas here.”

Lendl has returned for the World Tennis Challenge in the South Australian capital starting Tuesday.

During three nights of exhibition matches, he’ll rekindle his rivalry with John McEnroe.

In their prime, McEnroe was Lendl’s bitter enemy. The feeling was mutual.

Now, even McEnroe is taken aback by Lendl’s transformation.

They played in Paris last year, as Lendl returned to public courts for the first time since chronic back injury forced his retirement in 1994.

“He was saying nice things to me,” McEnroe said on Monday.

“I’m used to him trash talking me in a negative way, so he threw me for a loop.”

Lendl, when asked about his serious demeanour in the 1980s and 1990s, quickly intercepted with: “And the 70s too”.

Perhaps it was his upbringing in the coal mining Czech city of Ostrava under a communist regime he hated.

Or perhaps it hereditary, from his talented tennis playing parents.

His mother Olga was once ranked Czech No.2, his father Jiri, had been ranked No.15.

Aged 13, Lendl could beat his father.

A year later, he defeated his mother for the first time – so she refused to play him ever again.

He won 94 pro events, including eight majors – after his 1984 US Open triumph, Sports Illustrated magazine infamously put him on the cover with the headline: “The champion that nobody cares about”.

But that is in the past for Lendl.

After quitting tennis, he turned to golf for his competitive fix.

He now plays off scratch; almost turned pro; has won 25 championships at four golf clubs where he’s a member.

Three of his five daughters are promising golfers and the sport occupies his life.

“I’m more worried about ruining my handicap by playing too much tennis,” he said with a smile.

“I never thought I would play tennis again, and enjoy it.

“I really do, I have a lot of fun out there.

“… I obviously like to win but it’s not nearly as important as it used to be in the past.