Great Britain's Hopman Cup title hopes are over after France secured a 2-1 victory in Perth on Wednesday night. 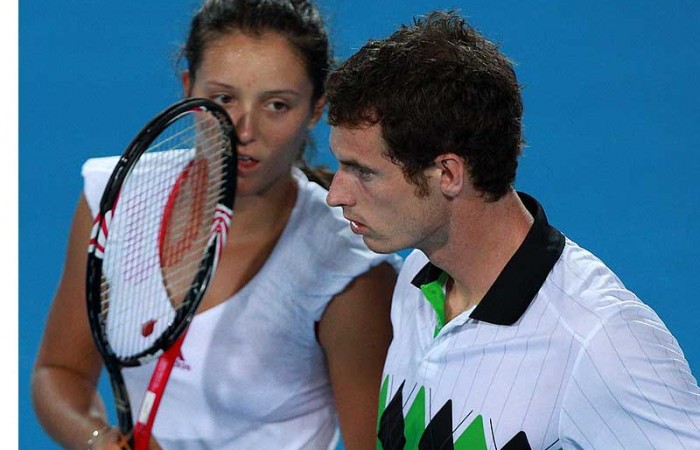 Great Britain’s Hopman Cup title hopes are over after France secured a 2-1 victory in Perth on Wednesday night.

Great Britain, who lost their opening tie to Italy, needed to beat France to retain a mathematical chance of reaching the final.

But Robson and Murray went down 6-4 6-2, leaving the US team of John Isner and Bethanie Mattek-Sands in the box seat from group B to reach the final, with Serbia almost guaranteed to top group A.

Mahut injured his ankle in just the third game of the mixed doubles but bravely battled on to help lift France to the tie win.

Murray, who only arrived in Perth on Saturday, was far from his best in the men’s singles and repeatedly chided himself after unforced errors.

But the 23-year-old lifted when the heat was on, saving two set points in the first set and one in the second to secure the win in 123 minutes.

Murray said his recent training ahead of the Australian Open may have left him a bit flat for the match.

“Sometimes at the start of the match your legs feel heavy (when you’ve been training heavily),” Murray said.

“First game that was quite clear, I hit a couple of really bad shots, almost right in the bottom of the net.

“Once I got warmed up and the adrenaline got going I played a lot better.”

Earlier, Robson capitulated in the third set to 17-year-old Mladenovic in the battle of the teenagers.

Robson, who was born in Victoria, displayed plenty of fight in the opening two sets but was simply no match for Mladenovic in a third set that lasted just 24 minutes.

Mladenovic was given a warning for taking too long between points in the second set but claimed the humid conditions led to her slow play.

“The umpire wanted me to go faster because I took a long time between points, but I needed to take my towel,” said Mladenovic, who also changed her dress after the second set.

“It’s very warm here at the Dome. I need actually to change my dress. It’s so wet.”

In the day’s other tie, the US put themselves in prime position to qualify for Saturday’s final with a 2-1 tie win over Italy.