Update 7:30 pm. Men’s semifinal action got underway today in the Australian Open Play-off with Peter Luczak’s tight affair with Matthew Ebden proving to be the match of the day. Luczak outlasted Ebden 2-6 6-1 7-6(5) to book a place in tomorrow’s final against Marinko Matosevic. In a day that featured fluctuating weather conditions from rain to… 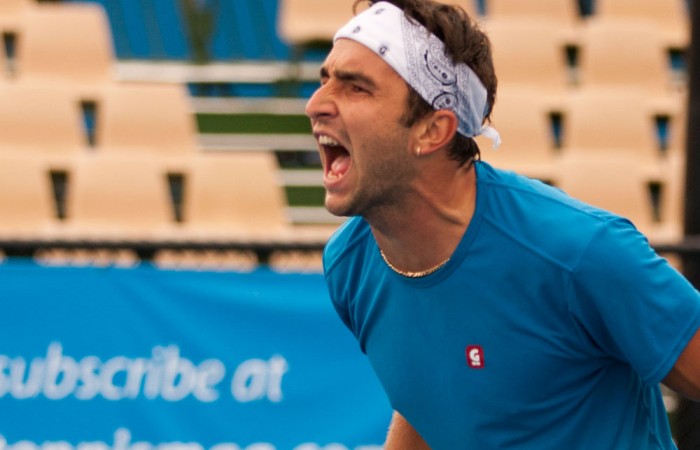 Update 7:30 pm. Men’s semifinal action got underway today in the Australian Open Play-off with Peter Luczak’s tight affair with Matthew Ebden proving to be the match of the day.

Luczak outlasted Ebden 2-6 6-1 7-6(5) to book a place in tomorrow’s final against Marinko Matosevic.

In a day that featured fluctuating weather conditions from rain to shine, the match between Luczak and Ebden was similarly unpredictable.

AO Play-off photos
From the outset Ebden made his intentions clear, attempting to slice the ball to the Luczak forehand and attack the net. His strategy prompted a rash of unforced errors from his older opponent, as Ebden took the lead in the opener 5-2. Closing out the set with an ace, Ebden looked clinical in the then relatively one-sided encounter.

However, the second set brought about a change of fortune for the Western Australian, who missed a succession of forehands to surrender a 2-0 lead. Moreover, Luczak’s forehand began to move Ebden around the court at will, extending the lead for the Victorian to 5-0.

A brief interval in the methodical second set display came when Ebden finally held for 5-1, which only delayed the inevitable. Luczak closed out the next game easily, sealing the second set with an ace.

Unlike the emphatic displays of the opening sets, the early stages of the third were close. Both players dictated on their own serve comfortably for 4-4. At that stage, Ebden’s serve came under fire from Luczak. Saving break points with some clutch serving, Ebden finally closed out the game to lead 5-4 with a down-the-line forehand winner.

As the match went down to the wire, the battle of wills began to surface between the two rivals. At 6-5 up in the third, Ebden’s first match point came after a Luczak forehand clipped the tape of the net. However, the Polish born Australian drew on every inch of his experience to save the first match point after yet another extended rally.

The second match point followed soon after when Ebden created another majestic backhand pass down the line. In typical fashion, Luczak survived the Ebden onslaught, which featured slices, loopy balls and flatter drives.

Coming back down to earth following that point, the tension between the two was almost palpable. Luczak faced another two match points and even a time violation from the umpire, but made it out of that game to force a tiebreaker.

Once again the momentum shifted in the breaker as Ebden broke early for a 2-1 lead. He extended his winning position to 4-2, but struggled to win a point after that. Winning four consecutive points to go up 6-4, Luczak never looked back, closing out the tiebreaker 7-5 for an emotional victory.

Following the victory, Luczak was certainly relieved, but not quite content with his level of play overall.

“I’m really happy and relieved to get through that one, probably wasn’t the best quality, especially through the first set, and was just hitting so many errors; but worked my way into it and I think me and Matty were both a little bit nervous, there was a lot on the line to get a wildcard, into the main draw of the Aussie Open.”

Attributing his mental toughness when facing match points to a clear sense of perspective, Luczak asserted that at the end of the day, it was just a tennis match.

“You know what, if you lose you lose, I had a peak at my son Sebastian and you know, it’s not the end of the world if you lose a tennis match. You just go for it and stay positive.”

Looking ahead to his next match, the Victorian had nothing but praise for his younger opponent.

“We played in a Challenger in Frankston, and I did beat him but he was only a young little fella, but he’s improved a lot in the last couple of years, he works really hard, he competes really hard on the court and there’s nothing in it in the rankings – he’s 137 and I’m 138.”

Meanwhile, in the other men’s semi, second seed Marinko Matosevic swept Adam Feeney aside to cement his place in Sunday’s AO Play-off final.

Matosevic ran out a straight sets winner, 6-3 6-4, to give himself a shot at an Australian Open wildcard.

The stop-start nature of today’s play wasn’t to Matosevic’s liking, but it didn’t stop him from adding another win to what has been a solid display of tennis from the Melburnian this week.

“There was a lot of delays today and not the best preparation, but once I got out there I felt good.

“It’s a nice feeling to be one game away from the Australian Open.”