Seeds off to solid start in Optus 18s

The Optus Boys’ 18s Australian Championships kicked off today at Melbourne Park, with the first round-robin matches beginning in warm conditions. Sectioned into four groups of four with two seeds in each, the first selection of matches proved to be fruitful for most of the seeds in a strong draw before some afternoon rain hit. Photos: Optus 18s… 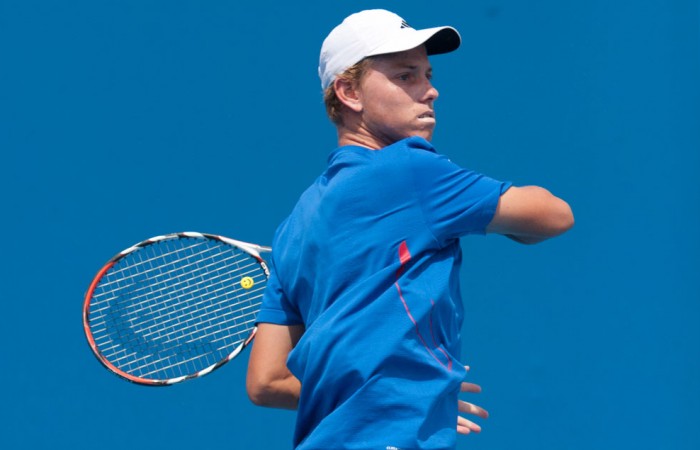 Sectioned into four groups of four with two seeds in each, the first selection of matches proved to be fruitful for most of the seeds in a strong draw before some afternoon rain hit.

Luke Saville fared the best of all the seeds, taking only an hour to dispose of Luke Immanuel Harvey of Queensland. The Junior Davis Cup representative and fifth seed was far too good in the 6-1 6-0 win.

Third seeded Maverick Banes was pushed in the second set, before he too closed out a straight sets 6-1 7-6(5) victory.

Group A matches saw top seed James Duckworth begin as expected, a straight sets win over wildcard Mark Richards. The 6-2 6-2 win took longer than the scoreline might have indicated, with players on court in tough conditions for more than two and half hours.

Last year’s Optus 16s champion Sean Berman suffered a mid-match slump before regathering to claim a 6-3 7-5 win. Berman, physically stronger than diminutive 16-year-old Jordan Thompson (NSW), flew out to a one set to love, 5-1 lead before some determined retrieving from Thompson saw him reel off four games in succession.

As both players became frustrated late in the set, with games pushing to deuce and neither player able to dominate, it was Berman who edged ahead and claimed the occasionally ill-tempered win in Group B.

The other match in the group saw local boy Andrew Whittington defeat the eighth-seeded Jack Schipanski of South Australia in straight sets.

Group D proved to be the tightest of all, with both matches pushing to three sets and all players still in serious contention to progress to the knockout stages.

Alexander Bolt, the fourth seed, lost a see-sawing match to Nicholas Kyrgios, a wildcard. The ACT-based Kyrgios is aged just 15 and was awarded a wildcard for the Optus 18s, and finished well to win 6-4 1-6 6-3.

Queenslander Andrew McLeod faced qualifying “lucky loser” Jarryd Chaplin, who showed his quality by pushing the sixth seed to three sets McLeod stormed home. The 6-7(4) 6-4 6-0 win ensured that no one player takes a substantial lead in sets and games into the round of qualifying.

Play continues tomorrow from 9:00 am, with some intriguing matches set to follow today’s results.

Duckworth will take on fellow seed Wagland, while Saville and Banes should decide the winner of their group with their battle tomorrow. View the order of play