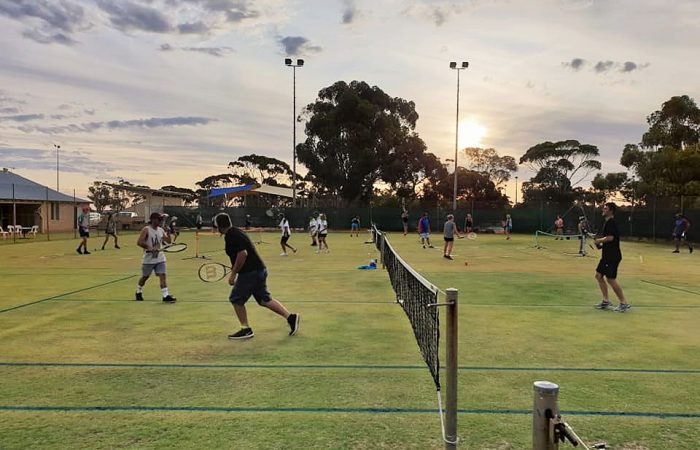 The Dumbleyung Tennis Club was a hive of activity on Friday night with some 40 locals taking to the courts for Tennis Australia’s all new social tennis format, Open Court Sessions.

Uniting the small rural community of Dumbleyung and surrounds, locals of all ages and abilities, were treated to the brand new format of social tennis which focuses on food, drink and music, all with a serving of social tennis on the side.

Local tennis coach Megan Henry, says the clubs first Open Court Session was a resounding success, with participants enjoying the new format, regardless of their experience or ability.

‘It was so much fun. Everyone loved it, mostly for the freedom on court that meant it didn’t matter how good or bad you were, it just mattered that you were out there having a go,’

‘The modified rules are key to people’s enjoyment of the all new format. Triples was a hoot which took the competiveness out on court to whole other level. It really was just so much fun’ Henry said.

Noting a large number of men in attendance, Henry says Open Court Sessions has something for everyone.

‘It was really pleasing to see so many men out on court, and in particular lots of young men who really seemed to enjoy the freedom and fun the new format delivers,’

‘The session only ran for an hour, and after everyone had something to eat and drink, they headed straight back out on court and played on until about 11:00 pm,’

‘The music changed everything. Having it play in the background was something we’ve never done before and it definitely brought a whole different vibe to the club,’

Joining in on all of the fun, were members of the Highbury Tennis Club, who travelled to Dumbleyung to see what all of the fuss was about.

‘Rural decline and isolation is a genuine issue in our area, so the regions support each other as much as possible by attending events and tournaments put on by each club,’

‘We had about ten members of the Highbury Tennis Club join us on Friday night and we’re already planning to take Open Courts Sessions to their club sometime in March,’ Henry said.

Longtime Dumbleyung local, and tennis player Howard Ward, says the all new Open Court Sessions format bought a diverse mix of ages, abilities and most importantly, fun, to the club on Friday night.

‘I’ve always loved playing tennis and it was great to be on court with so many different ages and abilities, and be active the whole time,’

‘It was just good social fun which is really important for our small communities,’ Ward said.

Hitting up more than 1000 clubs across the country, and some 87 clubs throughout regional and metropolitan WA, Open Court Sessions introduces tennis with a contemporary twist. There’s no longer the need to join a club, sign up for lessons or commit to a weekly competition.

Instead players can participate in a range of dynamic tennis activities, putting a spin on the traditional game with entertaining new formats and a variety of equipment. All skill levels are welcome and can join in the fun with no strings attached.

Open Court Sessions are run by enthusiastic hosts who keep things moving and ensure the fun rolls along on and off the court. All equipment is provided and you can come alone or with a group of friends. Each session includes a range of activities, with time for socialising off the court just as important as the time spent hitting a ball.

Open Court Sessions, along with Cardio Tennis and Court Hire ensure there’s the perfect tennis offering for everyone who’s keen to jump on court and have a hit.

Dumbleyung Tennis Club is set to host the next Open Court Session on Friday 21 February. Arrival at 5:30 pm for a 6:00 pm start. More information can be found at play.tennis.com.au