Rising Australian star Kimiko Cooper has claimed a 14 and under singles title on the Tennis Europe Junior Tour in Austria. 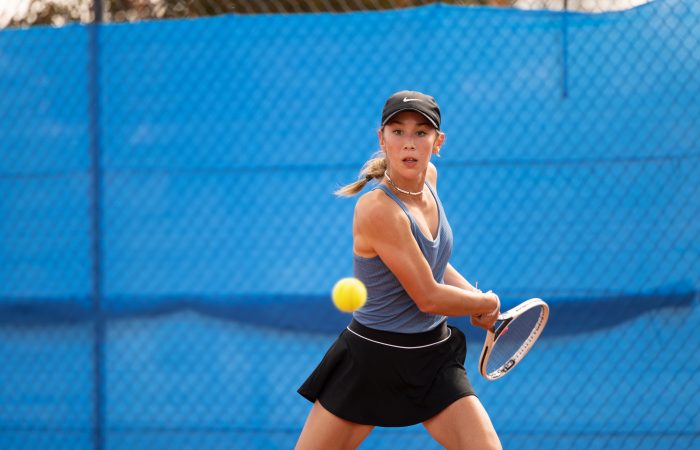 Five Australian junior players reached the final rounds of the Sparkasse Bambini Cup, part of the Tennis Europe Junior Tour, on clay in Kufstein, Austria over the weekend.

“It was a good opportunity to have a win. It was a good experience, a tough three-setter. She (Alame) played really well, really aggressively,” Cooper said after the final.

“I’ve had a good week of tennis being able to play on the clay, it suits my game style.”

Cooper, who won the 14/u Australian Claycourt Championships in Canberra in April, said her first international tour has been a valuable experience.

“I’ve learnt to be independent, to be able to get ready for my match and look after myself properly,” she said.

Four Australian girls started in the 64-draw 14u Tennis Europe tournament in Kufstein, Austria. In a milestone feat, they’re the final four who’ll contest the semifinals

Australia was represented by Daniel Jovanovski (Vic) in the final round of the 14/u boys’ competition. He lost to third seed Thilo Behrmann of Austria in the final, 7-5 3-6 7-5.

Tennis Australia’s Tours, Camps and College Manager Rohan Fisher said it was a memorable week for the junior playing group in Austria.

“To be here at the 14/u event, to see three finalists and another two semifinalists, the first time these players have been to Europe, has been an unbelievable result for all players,” Fisher said.

The last couple of months has seen a number of Australian juniors in 12/u, 13/u, 14/u and 18/u age groups travel to France, the United Kingdom, Ireland, Germany, the Netherlands and Austria to compete internationally against some of the world’s best tennis players.

From 1 to 6 November, Australian teams will compete in the Junior Davis Cup and Junior Billie Jean King Cup Finals for 16/u players in Antalya, Turkey.

“We’ve had a lot of players across a lot of countries over the last three months which is really exciting,” Fisher added.

“The idea of coming across to Europe, there are so many variables here that we don’t have the opportunity to experience at home.

“The way they play on clay courts over here compared to the way we play at home, it’s quite different.

“The use of the drop shot, the way they hit in behind. There are some real parts of the game that we don’t see enough of in Australia, so it’s been really important to get over here.

“The tournament’s themselves, they operate differently, the time of the day that they’re played. It’s just completely different to what we see in Australia.

“Our players are also dealing with what the food looks like. It’s not the same comfortability of home. It’s just a really great experience for our players to be seeing things they haven’t seen before.

“The players that they play against themselves, they don’t know who they are playing, they don’t know their background, it really opens up the door for starting a fresh. Not knowing what you’ve got to do against this player as you don’t have any history, becomes a really invaluable tool for our players.”