As he marks the 20th anniversary of his 2002 Wimbledon title, Lleyton Hewitt knows the emotion Nick Kyrgios will experience as he faces Novak Djokovic in the final tonight. 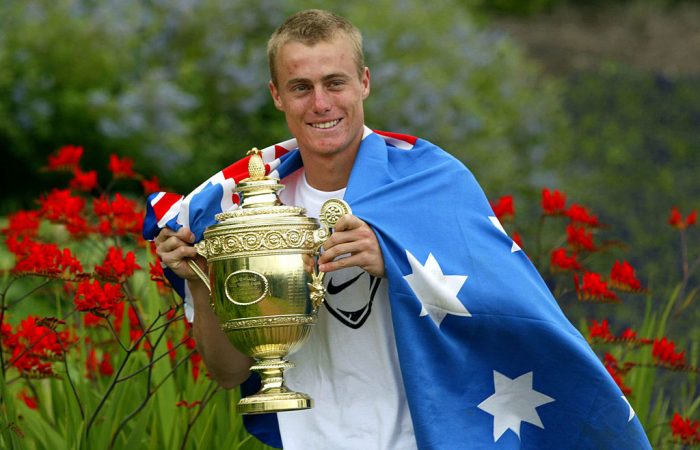 Kyrgios has the chance to become one of 16 Australian players to lift a gentlemen’s or ladies’ singles trophy at the All England Club.

Many milestone anniversaries of these victories have been celebrated this year.

It’s 70 years since Frank Sedgman swept the singles, doubles and mixed doubles titles at 1952 Wimbledon and 60 years since Rod Laver claimed the second of his four Wimbledon titles, on the path to a calendar-year Grand Slam, in 1962.

“It's such a special place for me."

Today, we celebrate 20 years since his stunning feat in 2002 🏆 pic.twitter.com/xYNJDun5i6

Hewitt, who featured in Centre Court centenary celebrations at the 2022 Championships, vividly reveals the details of his win.

“There was a lot of pressure and expectation the whole tournament. It was my first time at Wimbledon going in as the world No.1 and the No.1 seed coming into the tournament,” he told Todd Woodbridge in a Channel Nine interview to mark his anniversary.

“It was completely different to the year before when I won at Flushing Meadows at the US Open and I was the real underdog going into the quarters, semis and final there.

“This was a different feeling. It was about controlling my emotions as much as anything, but I had incredible self-belief over those two weeks. I knew I was the best grass-court player in the world at that time.”

The self-belief proved justified, with the then-21-year-old Hewitt winning all but one of his seven matches in straight sets. After his quarterfinal against Dutch player Sjeng Schalken was a five-set marathon, Hewitt’s semifinal victory over British favourite Tim Henman may have been the Australian’s biggest test.

“It was like an Ashes battle,” Hewitt smiled of the British-Australian rivalry. “And with my personality and the way that I went about my tennis, it probably brought out the best of me as well. And so I came out and played an incredible match.”

#OTD 20 years ago 🏆🌱@lleytonhewitt commanded the baseline and broke serve to a dominating 6-1, 6-3, 6-2 victory over David Nalbandian in the 2002 @Wimbledon final, becoming the first Aussie to win the title in 15 years.

Hewitt saved his best for the final, allowing the 28th-seeded Nalbandian only six games over three sets. It was the most one-sided final since John McEnroe restricted Brit John Lloyd to four games in the 1984 decider. Even so, composure was required when rain interrupted in the second set.

“I was only a set and a half away from holding up this prestigious trophy and that was probably one of the toughest stages mentally to go through,” Hewitt reflected. “But (it was) an incredible feeling when you finally win that match point.”

Years of dreaming for victory at The Championships spurred Hewitt on. “I always dreamt of climbing into the stands like Cashy (Pat Cash) did,” the Australian remembered. “I’d watched that (1987) Wimbledon final, Cash against (Ivan) Lendl so many times.”

Hewitt can appreciate the unique emotions that fellow Australian Nick Kyrgios will experience when he takes to the famed Centre Court to meet top seed Novak Djokovic in the final tonight.

“Making that final walk on the final Sunday of the tournament, that’s something you only dream of,” said the 2002 champion. “For me to get the opportunity to do that was something really special.”