Seventy years since Frank Sedgman claimed the singles, doubles and mixed doubles titles at 1952 Wimbledon, the Australian retains a rare and special place in the sport. 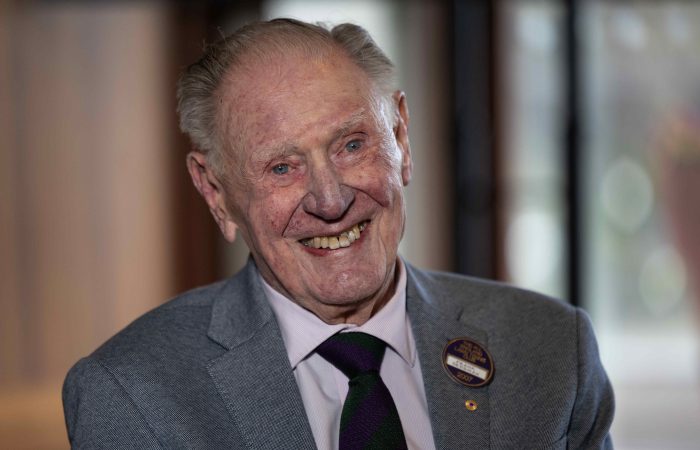 As a string of Australian players recorded career-best performances at 2022 Wimbledon, a former champion celebrated a remarkable All England Club milestone that has stood the test of time.

It is 70 years since a 24-year-old Frank Sedgman swept the 1952 singles, doubles and mixed doubles titles at The Championships – a feat that no other player has replicated in the seven decades since.

“You know, it was a big day for me because winning Wimbledon and then of course winning the three titles in the one year is something special,” said an ever-humble Sedgman, who matched the sweep that American Bobby Riggs had achieved in 1939. “It turned out to be a good year.”

Indeed, “Frank Sedgman’s Wimbledon”, as it was described in British newspapers, heralded a new era for both Australian tennis and the sport.

Renowned for his speed and athleticism, the serve-volleying Sedgman set a benchmark as he defeated players including Don Candy, Eric Sturgess and Mervyn Rose.

He was especially motivated as he faced Jaroslov Dobny, who was born in Czechoslovakia but then represented Egypt, in the final.

“I was runner-up in the French championships, and I played the guy that I beat at Wimbledon, that’s Drobny,” Sedgman reflected.

“He was a good clay-court player so I played him after the French championships and I played in Monte Carlo and Italy and I beat him there, so I thought I must have had a chance at Wimbledon.”

Nerves were a factor as Sedgman, the No.1 seed at the 1952 tournament, dropped the opening set of their final on grass. But the Australian quickly recovered, emerging with a 4-6 6-2 6-3 6-2 win.

There was little time for celebrating. Harry Hopman, then the Australian Davis Cup captain and coach of Sedgman, was quick to remind the new champion that he still had doubles finals to play.

“I think he backed me to win the three titles, so he wanted to keep me under wraps sort of thing. And anyway, I won the three titles that year and it turned out to be history-making,” Sedgman said.

The Australian combined with American Doris Hart to defeat Enrique Morea and Thelma Long, from Argentina and Australia respectively, and claim the mixed doubles crown.

He partnered with countryman Ken McGregor to defeat American-South African duo Vic Seixas and Eric Sturgess in the gentlemen’s doubles final. It took the Australian team, who were defending champions, only 50 minutes to record their 6-3 7-5 6-4 victory.

To mark Sedgman’s platinum anniversary, a lunch was held at the historical Kooyong Lawn Tennis Club in Melbourne. As he attended with his wife Jean and family, the much-loved Australian player was feted by more than 200 guests.

Others provided congratulations from afar. Rod Laver, who is in London for the 2022 Championships, noted Sedgman’s positive influence on the sport.

“He also has his name on many trophies around the world,” said Laver, a winner of four singles titles at Wimbledon. “Frank was responsible for bringing in the modern game to tennis, with his serve and volley routine.”

Ken Rosewall, a winner of eight Grand Slam singles title and a four-time runner-up at The Championships, described the unforgettable experience of watching his friend and countryman claim the history-making title first-hand.

“Frank was a top player, there’s no doubt about that. His reputation was pretty hard to follow but he led the Australian contingent of top players for many years,” Rosewall said.

As the first Australian to lift the singles trophy since Jack Crawford in 1933, Sedgman inspired a string of countrymen at the grass-court Slam. Lew Hoad, Ashley Cooper, Neale Fraser, Laver, Roy Emerson and John Newcombe all triumphed at Wimbledon over the next 20 years.

Roger Federer notes the legacy that Sedgman and his contemporaries established in the sport.

“Back in the day we were not aware of all the things you were doing for tennis, but I hope you know that I am still one of the older guys (who) will never forget where the game came from,” said the eight-time Wimbledon champion in a congratulatory message.

“You have marked our wonderful sport like so many of the great friends of yours, and legends, that have paved the way for us.”

Sedgman’s impact at a grassroots level also endures. As Tennis Australia CEO Craig Tiley noted: “We’ve incredibly proud of you and your family and your approach to the game, but also your unbelievable accomplishments.”

Watching the 2022 Championships from his home in bayside Melbourne, Sedgman is delighted of the life that tennis helped he and his wife Jean to create.

“We have four daughters, we have a nice family life and it’s been a marvellous life for us,” he smiled.