Matthew Ebden and Max Purcell are the first all-Australian team to capture a Wimbledon gentlemen's doubles title in 22 years. 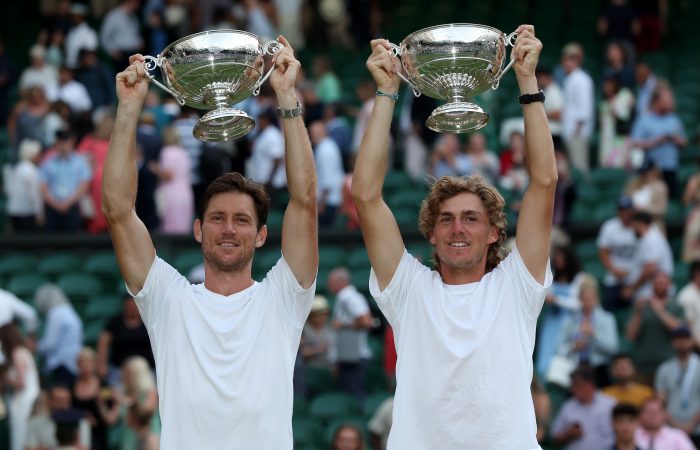 The Aussie duo captured their maiden major title together with a 7-6(5) 6-7(3) 4-6 6-4 7-6(2) victory against defending champions Mate Pavic and Nikola Mektic in a fiercely contested final at Centre Court today.

Wimbledon glory for Ebden and Purcell 🏆

Ebden and Purcell’s victory snaps the 23-match winning streak of world No.3 Pavic, who was playing with a fractured right wrist following a semifinal fall, and world No.6 Mektic on grass. The second-seeded Croatians had claimed the title at their past four grass-court events.

Little separated the two teams in an enthralling four-hour and 11-minute battle, with each recording only a single break of serve across the first four sets.

It took until the 10th game of the fourth set for world No.31 Ebden and world No.34 Purcell to snare a break, pouncing on Mektic’s serve with exceptional returning to level the match at two-sets apiece.

Pavic and Mektic regained control in the deciding set, breaking Purcell’s serve in the fifth game to edge ahead 3-2. But the Aussies fought back, breaking Mektic in the eighth game to level.

The twists and turns continued in a tense fifth set, with the Aussies bravely saving two break points in the ninth game.

Both teams held firm in the high-pressure final stages, forcing a match tiebreak. From there, the Australians dominated to clinch the title.

“Matt and I just combine so well, we are picking each other up out there,” Purcell said. “Something kind of changed towards the end of the third set. We thought ‘let’s just play on Centre Court and enjoy ourselves’. We did that and now we have got the trophies.”

They are the sixth all-Australian team to achieve the feat – and the first since Todd Woodbridge and Mark Woodforde claimed their sixth title together in 2000.

“Mark Woodforde was actually out on the warm-up court with us this morning,” revealed Ebden. “Todd Woodbridge has been chatting with us as well, so we definitely channelled the Woodies. They are great mentors.”

They become only the second team in the Open era to win a Wimbledon title after recording multiple comebacks from two-sets-to-love deficits, matching the efforts of fellow Australians John Newcombe and Tony Roche in 1974.

The No.14 seeds also saved three match points in their opening round and an incredible five in their semifinal victory. This makes them the first Wimbledon champions in any event to save match points in multiple matches.

Ebden was also a finalist in the Wimbledon 2022 mixed doubles competition with Sam Stosur.