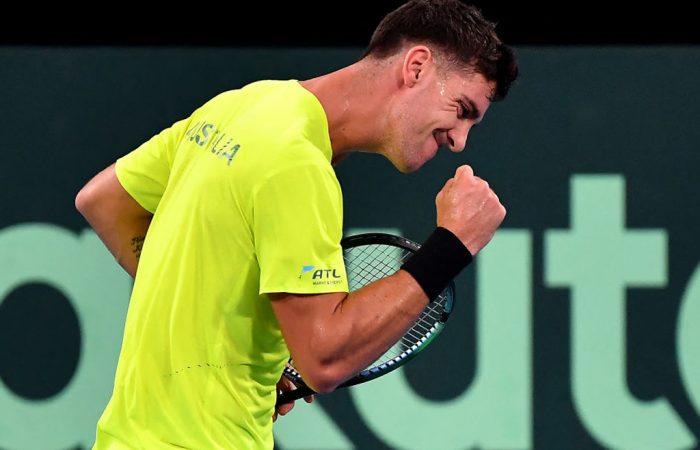 Thanasi Kokkinakis has written another chapter in his remarkable 2022 comeback story, with a win over Zsombor Piros also securing Australia’s victory over Hungary in the Davis Cup qualifier at Ken Rosewall Arena.

Kokkinakis claimed a 6-4 6-4 win in the live fifth match against Piros, ensuring Australia advances to the round-robin stage of the 2022 Davis Cup Finals.

It was the 25-year-old’s first match win in the world team event since September 2015, when he last represented Australia in the World Group semifinals against Great Britain.

“It’s been a seven years since I played Davis Cup and this is incredible, playing in this atmosphere,” Kokkinakis smiled.

Earlier, John Peers and Luke Saville suffered a surprise loss to Fabian Marozsan and Mate Valkulz in the doubles, creating an important lead for Hungary.

An eventual 3-2 victory marked the first time since 2015 that Australia recovered from a 1-2 Davis Cup deficit.

Thanasi timing ⏰@TKokkinakis secures the decisive match and a Finals spot for the green and gold #DavisCup #byRakuten | @TennisAustralia pic.twitter.com/puPcZm7UPP

On that occasion, Lleyton Hewitt defeated Aleksandr Nedovyesov in a live fifth rubber to secure victory over Kazakhstan in the World Group quarterfinals in Darwin. Fittingly, the 41-year-old now leads Australia’s Davis Cup team as captain.

If the high stakes created nerves for Kokkinakis, he easily controlled them against world No.240-ranked Zsombos.

Gaining a break of serve in the third game, Kokkinakis maintained his lead to secure the opener in 37 minutes.

The South Australian also led from the same stage of the second set, piling pressure on his younger opponent as he gained a 3-1 advantage.

Kokkinakis’ trademark serve proved most damaging, with nine aces and not a single double fault adding to an all-round dominant display.

He did not face a break point in the 86-minute encounter, completing victory with an ace on his first match point.

But perhaps most impressive was Kokkinakis’ composure, after a three-set loss to Fucsovics yesterday. He pointed to leadership from Hewitt as captain and De Minaur as No.1 player as a factor in his calm under pressure.

“I had full confidence in the guys. Demon’s our leader (it was) an unbelievable week for him too. Really high-quality matches, he put Australia on his back time and time again,” Kokkinakis related.

“I had to try and do my part but all the boys have had a great week. I thank Lleyton for trusting me – as I said, it’s been a long time since I played.

“To play a fifth rubber at home, it’s incredible. I get nervous but knowing these guys give it their all every time, it makes me want to come out here and perform.”

The confidence-boosting Davis Cup victory adds to what already rates as a career-best season for the 25-year-old, who claimed a first ATP singles title in Adelaide earlier this year and lifted the Australian Open men’s doubles trophy alongside Nick Kyrgios.

“I couldn’t have asked for more to start the year,” said Kokkinakis, declaring today’s victory as a clear highlight.

“Davis Cup is so different. In those singles tournaments, ATPs, you’re playing for yourself – here you’ve got it feels like the whole country backing you and supporting you.

“It’s a different type of pressure but it’s something that if you want to play on the big stage you’ve got to get used to. Just having the support is unreal.”