Thanasi Kokkinakis is high on confidence and relishing the team spirit ahead of his first Davis Cup match, against Hungary's Marton Fucsovics, in almost seven years. 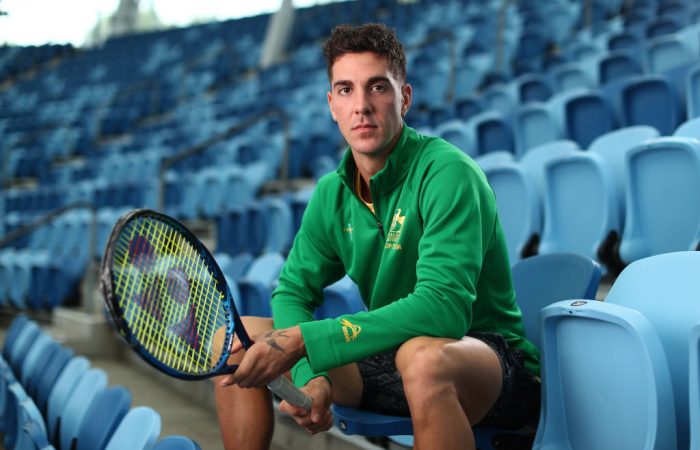 When Thanasi Kokkinakis takes to court at Ken Rosewall Arena later today, it will be more than 2300 days since he last competed in a Davis Cup setting.

On that September 2015 occasion, against Great Britain in the World Group semfinals, Kokkinakis lost to world No.3 Andy Murray.

Earlier, the then-19-year-old had claimed a straight-sets win over Dan Evans, contributing to a 2-3 win-loss record he already held in Davis Cup rubbers.

As he takes to the court against Hungary’s Marton Fucsovics in the second singles rubber, it’s more recent memories that will propel the South Australian.

At Miami last year, Kokkinakis pushed the Hungarian in their only match on tour, with the then world No.40-ranked Fucsovics requiring three sets to progress past the world No.243 Australian.

“I had a tight one with him last year, which could have gone either way, so I’m going to try and get out there, compete hard and hopefully get it done,” said Kokkinakis ahead of this evening’s encounter against the 30-year-old Hungarian.

Kokkinakis can do so with confidence, with recent form showing he is a vastly improved competitor since that Miami match almost a year ago.

In Australia this summer, the 25-year-old progressed to the semifinals of the first Adelaide International tournament before lifting a first ATP singles trophy in the second tournament in his home city.

“My tennis in general – I worked so hard, grinding it out last year trying to get back to this point and then to show my best tennis on home soil means a lot,” said Kokkinakis of the confidence he gained after winning eight of his first nine matches for the season.

“I think I’ve always believed in myself, what I’m capable of, but it’s been the consistency and being able to back it up that’s been the most pleasing part for me.”

Returned to the world’s top 100 after recovering from his well-documented health challenges, the Australian is embracing another opportunity in a transformational start to the 2022 season.

“It’s a pretty cool feeling. It’s been six or seven years but yeah, stoked to get a call-up from Lleyton,” said Kokkinakis of his long-awaited return to the Australian Davis Cup team.

“Being around a good group of guys, everyone’s bonding really well, everyone’s hitting well … I’m stoked I got the call-up.”