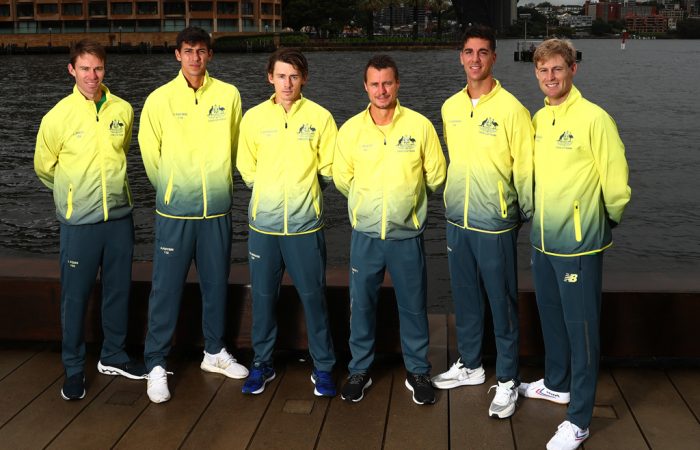 Alex de Minaur and Thanasi Kokkinakis will lead the day one charge for Australia in the Davis Cup qualifier against Hungary at Ken Rosewall Arena.

De Minaur was today named to face No.2 Hungarian Zsombor Piros in the opening singles rubber during the official draw ceremony at The Rocks in Sydney.

Almost seven years since he last competed for Australia in Davis Cup, Kokkinakis will follow against Hungarian No.1 Marton Fucsovics.

Team captain Lleyton Hewitt explained that Kokkinakis’ breakthrough Australian summer, in which he claimed a first ATP singles title at the Adelaide International, helped in the difficult decision to name Kokkinakis over the similarly talented Alexei Popyrin.

“I think the way that Thanasi performed in Australia and how his body’s been holding up is all credit to him. He’s put in a lot of hard work and he deserves this opportunity tomorrow night to have a crack at their No.1 player,” Hewitt said.

“We have full belief that he can really try and crack this tie open for us tomorrow. I’m looking forward to being out there on court with him.”

Kokkinakis is equally excited to return to the Australian team. “It’s been so long for me to play. It’s a different sort of atmosphere, a different sort of feeling and one that I kind of jumped at the opportunity when Lleyton asked me,” said the 25-year-old.

“I’m stoked to be around the guys again. Can’t wait. (It’s my) first time playing in Sydney so that should be fun and yeah, it’s just going to be good to put on the colours and get after it.”

John Peers and Luke Saville, contesting his first Davis Cup match for Australia, will combine for Saturday’s doubles rubber against Fucsovics and Fabian Marozsan on Saturday.

“The boys have done everything that I’ve asked of them. I’ve got full confidence in them that they’re going to play well,” Hewitt said.

Saturday’s singles rubbers will see a reverse of the day one encounters.

For De Minaur, the opportunity to compete again on a favourite court at Ken Rosewall Arena adds to his passion in the team event.

“It’s been a court where I’ve had some great memories,” said the 23-year-old, who claimed the first of five singles titles at the 2019 Sydney International.

“Some special moments, a court I’ve grown up on. Just to play in front of family and friends, play some of my best tennis on that court, it’s going to be very special.”

Victory over Hungary this weekend would see Australia qualify for the 2022 Davis Cup Finals, the first stage of which will be played at a yet-to-be-determined location in September.

“We want to be playing in the Finals at the end of the year,” said Hewitt. “That’s when you can win the event and I truly believe that we have the players that we can go deep in this competition.